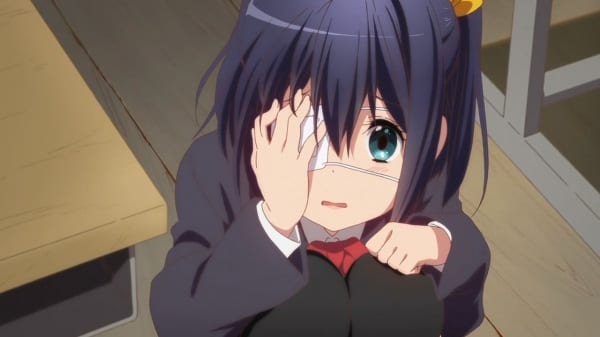 Madman Entertainment, an Australian publisher of anime series recently announced that they had picked up the online streaming rights to Chunibyo Demo Koi Ga Shitai! and would be streaming it through the ‘Madman Streaming Room’ via their official website.

The first episode is now available to view at the following link: CLICK HERE. They haven’t confirmed if one episode will be released per week or if they will be doing a three episode catch-up comparable to Anime Network in North America. A home video release of this series is set to follow in 2013.

Yuta has a problem. First, Rikka has told him that they’re officially dating, but she’s… a little bit delusional. There’s also the fact that he used to be a little delusional himself, one of the thousands of Japanese students afflicted with “Chunibyo” a mental state where one is said to have delusions of grandeur. So desperate to stand out that they’ve literally convinced themselves that they have secret knowledge and hidden powers.

Unfortunately, that’s not the main part of Yuta’s problem. No, the real problem is that, even though he’s no longer delusional, and Rikka might have been getting better, his other female friend, Satone, his one true soul mate back when he was a Chuuni, has ripped back into his life and she’s still epically and truly NUTS! How bad? Let’s just say that she prefers the name Sophia Ring SP Saturn VII; that she’s not happy that her partner in Chunibyo has cut her off; and that she’ll joyfully tear Yuta’s real world to pieces in order to get him back in her imaginary one! “A crazy little thing called love” gets a whole new meaning as three fantasy worlds collide in CHUNIBYO DEMO KOI GA SHITAI!