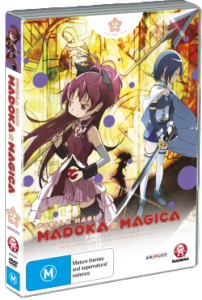 Title: Puella Magi Madoka Magica Volume 2
Encompasses: Episodes 5-8
Published by: Madman Entertainment (Australia and New Zealand), Aniplex of America (North America)
Based on: An anime-exclusive series which has since spawned a line of manga and game titles.
Genre: Drama, Magical Girl, Tragedy
Audio: English and Japanese Dubs
Subtitles: English
Runtime: 100 Minutes
Classification: M for Mature Themes and Supernatural Violence
Special Thanks: Madman Entertainment for providing me with a review sample of this release

With Mami gone and Sayaka now a magical girl, Madoka is now contemplating whether to join her friends as a magical girl. Things escalate when a new hyper aggressive magical girl shows up. Sakura Kyoko is a seasoned magical girl and will not allow anyone to get in the way of her obtaining more Grief Seeds. 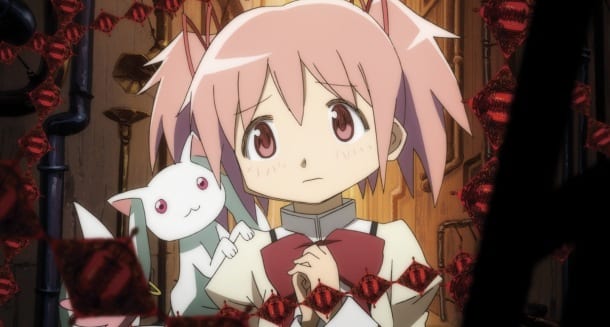 Once again following the nowadays uncommon choice of releasing anime series as volume releases rather than collections of 12-26 episodes, we now have the second DVD and Blu-ray release of Puella Magi Madoka Magica in the Australian and worldwide markets. While it is usually a bit more difficult to get into the mood and generating interest towards a series when you only have 4 episodes per volume release every couple of months (Eg. Season one of K-ON!), Puella Magi Madoka Magica has once again provided a set of episodes which provide a consistently interesting watching experience from start to finish.

Following on from the previous volume where Madoka and Sayaka are offered the chance to become magical girls by a creepy constantly-smiling creature named Kyubey, are subsequently warned off by mysterious transfer student Homura, meet a magical girl named Mami who subsequently dies infront of them and Sayaka becomes a magical girl… we have finally moved on from the introduction stages of the series and have moved to the episodes where the weight of the storyline is. Surprisingly however, this part of the storyline leaves Madoka in the background, focusing on developing the finer points on being a magical girl and two of three currently in this series – Sayaka and newcomer Kyoko. 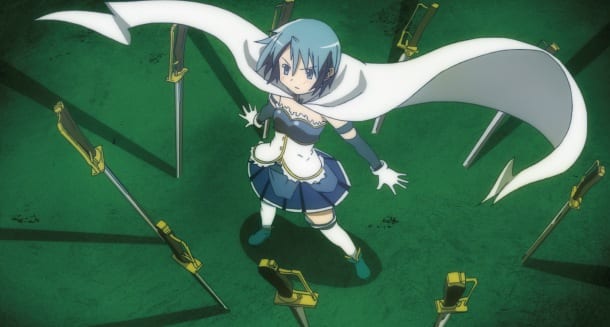 Let’s be honest… 12 episodes does not give a lot of time to develop the characters or world, but what they did provide proved engaging and leaves much open for the series conclusion and generating your own opinions on the characters intentions. The impacts of Sayaka’s wish from Kyubey and her decision to hold onto her values despite not necessarily allowing for her survival are of key focus in these episodes but also incite into the life of newcomer Sayaka proves interesting and provides moral contrast for Sayaka and assumingly most magical girls.

While there is much sorrow and anger between these characters, Madoka and Homura are more or less pushed to the side – Madoka much more than Homura. Madoka is mostly left in the side lines during battles and the only role she really has is serving as someone to add *Gasping* vocal effects every few minutes and being taunted by Kyubey to form a contract. Considering the plot they are continuing down, it is evident she will be having a major role in the final four episodes but her only role has been to serve towards adding to the mystery of Kyubey and being the protected damsel. Homura only has intermittent roles as well similar to the first Volume, but is shaking up to be the most interesting of them all.

Overall, they have gone from introducing the world to building up the world in this volume, and I think they have done an excellent job at developing a dark, tense and sometimes sorrowful world and plotline in such a few episodes. Hopefully this carries on into the final episodes, which given popularity of this series sounds like a given. 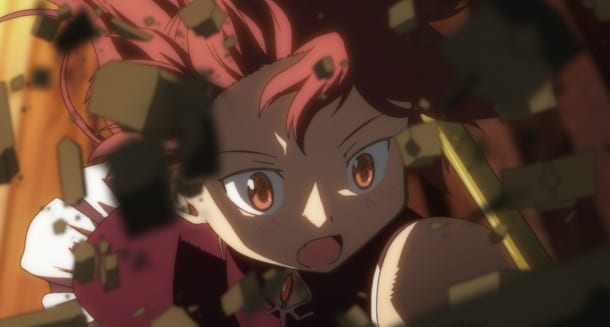 My feelings toward the design in this volume remain unchanged from my previous review, a very strong visual performance by the team at Studio SHAFT although with a notable reduction in the number of labyrinth the girls visit and battle in which was a bit of a bummer. There was a particularly effective use of silhouetting during one of the battles in a later episode which showed the (desperate) emotion through actions and not facial expressions. Other than that, there is nothing much to say regarding the designs other than this is a series that benefits from Blu-ray.

Similar to my previous review as well, both music and voice acting was a consistently high standard but is once again overshadowed by the engaging storyline and visuals. With the exception of the opening sequence, the series drops most of the cutesy music styles found in other magical girls anime series choosing to go with darker and softer tunes for the most part. Well implemented either way. Can’t say the implementation of a remixed opening theme as an Arcade Dance machine tune hurt either.

The English voice cast have warmed into their roles with Cassandra Lee as Kyubey once again being a highlight for me. While we got a brief sample of her voice work in the previous volume, Lauren Landa also did a strong performance of and suited the role of Kyoko Sakura. 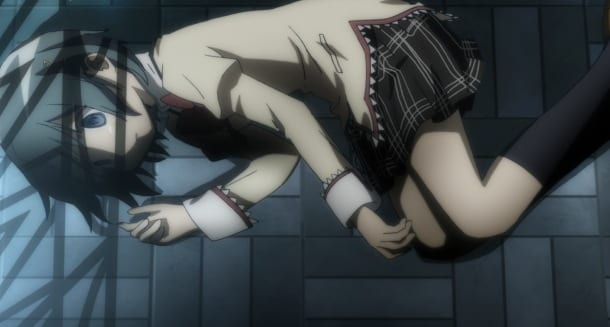 Over here we have unfortunately not had the North American limited editions released to our market. Unfortunately, the on-disc extras are also pretty slim consisting of only:

While I believe it is slightly detrimental for this one season anime series to be spread over three volumes, it has definitely left me waiting eagerly for the third and final volume to be released next month by Madman Entertainment (If you live in North America, you can pick up your copy now). It has once again shown that their rather unique take on the whole Magical Girl genre works and heck… I doubt I will be watching any other series in the genre for a while without my mind going back to Madoka Magica.