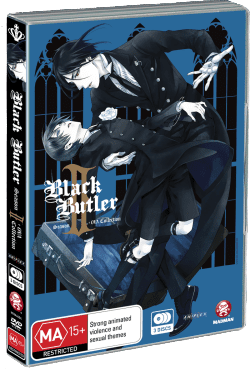 When last we saw dear Sebastian, he was poised to feast on the ripened soul of his young master. Unfortunately for the debonair demon, there’s a new butler in town… Enter Claude Faustus, a malevolent manservant uninspired by the drab flavor of his own contracted master, Alois Trancy. This pedestrian lad holds no allure for Claude, so the bespectacled butler sets his sights on a finer delicacy from the menu of the damned: none other than Ciel Phantomhive. And so begins a devilish dance of death starring crow and spider.

The demonic duel rages beyond the limits of good taste, culminating in a debaucherous maze of madness pitting butler against butler. Sebastian and Claude: two ravenous rakehells filled with the power of darkness and locked in a macabre battle for the soiled soul of the young master they so long to savor/devour. 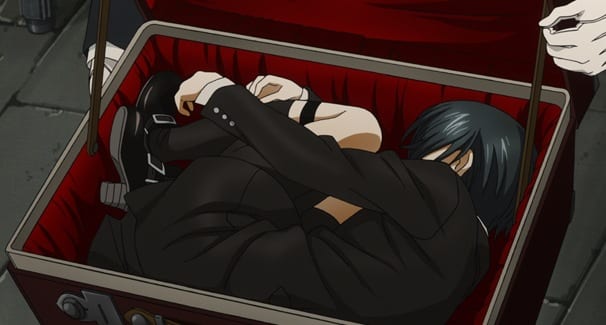 Earnestly I enjoyed the first season of Black Butler when I wrote up review for the two collections released by Madman Entertainment last year. I thought the setting, delivery of plot and charming voice acting provided an overall enjoyable watching experience with a conclusion that actually worked… and went down the route they had made clear since Episode 1. Usually with a conclusion such as “the main character dying”, they would leave it at that and not try to produce a sequel. Despite all this we have Black Butler II, a sequel which sees Ciel reborn with the aid of Sebastian, pits them against new Master/Butler couple Alois and Claude and reduces every other character in the series to mere cameo appearances. The question is…. does this work?

It does, but it does not match the standards set by the plotlines in Season 1, even factoring in that there is only half the number of episodes in this release. The first episode dedicates itself to introducing Alois Trancy and his butler Claude Faustus who share a similar relationship as Ciel and Sebastian do. Harboring the stolen soul of Ciel Phantomhive, Sebastian manages to swipe it back and resurrect his young master albeit with some unintentional missing memories. Despite the small episode count and urgency of the issue, the first half or so of the series are dedicated to the one-off episodes which pits Ciel against crimes and criminals as the “Queens Guard Dog” amongst parties and boat rides for mythical stags. Some of these work better than others, but it takes far too long to even get to the point as to why Ciel survived and the necessity for this season. 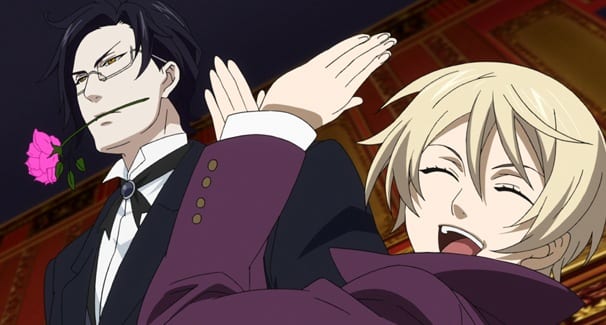 Fortunately while I left feeling that this second season wasn’t necessary for the anime series the second half of it actually proved to be an interesting watch, and despite initial perceptions of Alois Trancy as a sadistic and villainous kid, paints him as a victim in the same light as Ciel was with his own tragic past and reasons for forming a rivalry with the main characters. All in all the storyline and its conclusion did seem a bit anti-climatic and reduced to several battles between the two butlers and lacked a big finisher. However it did go well in terms of developing the characters in the second half and left me not feeling like I had wasted my time on it.

In addition to the completed second series of the show, 6 OVA episodes were varied in quality. Ciel in Wonderland for example which is a two-episode Black Butler adaptation of Alice in Wonderland had its moments but otherwise offered little in terms of storyline or entertainment, while others such as a mock “Behind the Scenes” of Black Butler II were unique and odd enough to prove enjoyable. The highlight of these OVA episodes was certainly the last one “The Tale of Will the Grim Reaper”, focusing on William T. Spears and Grell who only had minor appearances in this season and provided some incite into the “Grim Reaping” process and the history between the two characters, both of which are only lightly touched in the actual episodes. 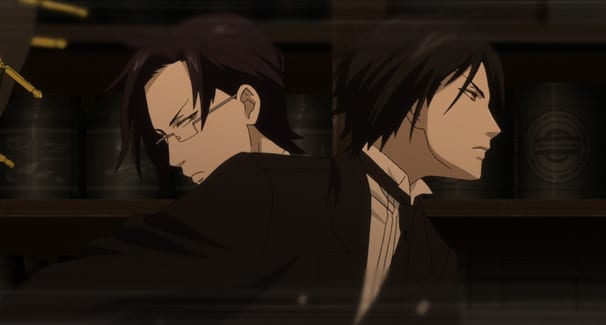 For the purpose of this review, I am reviewing the Blu-ray release of this season rather than the DVD release with the first season. While it lacks that added degree of detail from the first season, they managed to once again capture the late 1800’s era effectively in architectural and technological design giving authentication to their world building, alongside the continuation of their habbit to showcase each dish prepared by the butlers with a blurb and considerable detail in its design. Character designs also capture popular attire and fashion of the era, opting for more conserved and elaborate clothing and hair designs.

Aside from these, designs for newcomers Alois and Claude are similar in comparison to the original main characters and are incorporated nicely into the overall the dark Victorian / Gothic aesthetic they have going. While there are no particular action events of interest such as say…. a battle against an Angel on the Bridge of London, the animation does provide the same effect as the first season, elegant, but action-packed and occasionally over-the-top. 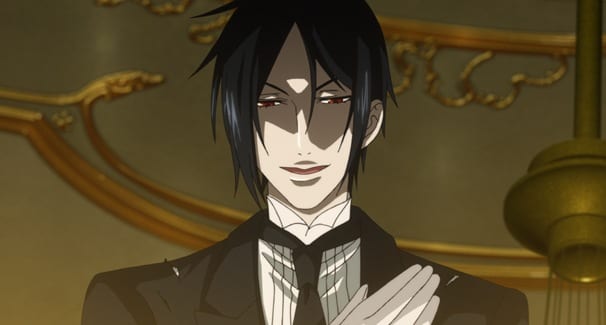 My opinion towards the music in this series remains unchanged… they have a nice set of melancholic and action-oriented tunes that suit the tone and themes of the series, however lacks the variety to go from Above Average to Great. To celebrate the two Master/Butler pairs in this season, two opening and two ending sequences are included and used intermittantly throughout the series. The opening theme is “SHIVER by the GazettE” with the animation differing depending on the focus of the episode. Irrespective of the animation, they both suit the series well and are comparable to the first seasons opening sequences. The two ending themes are “Bird by Yuya Matsushita” and “Kagayaku Sora no Sijima ni wa by Kalafina” once again based on Ciel and Alois respectively. Neither was anything impressive in the animation department but were pleasant songs to listen to.

My opinion has not changed on the voice acting being the winning component to this series. They have chosen voice actors and actresses who can perform to some extent, different British accents from the era. It helps provide authenticity to the developed world and while not to everyones taste I would recommend giving the English dub at least a listen to before switching to the Japanese dub. Both Luci Christian as Alois Trancy and Jason Douglas as Claude provide solid voice work to an already solid voice cast. 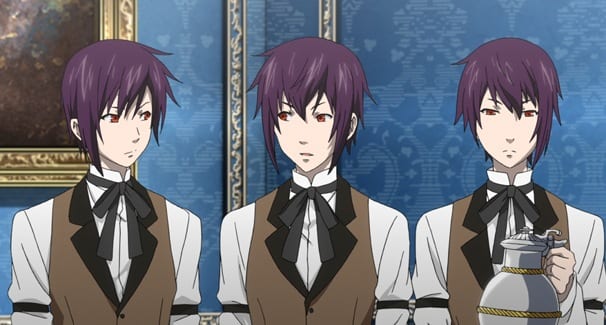 For this release, the extra content included on the disc was sufficient and enjoyable. These included:

While it doesn’t capture the same charm as the first Season, for those who enjoyed the first season there should be more than enough here to merit at least a single watch-through.

Final Score
Storyline / Character Development: B-
Design: A
Music/Voice Acting: B
Extra Content: A
Personal Preference: B-
Overall Score: B