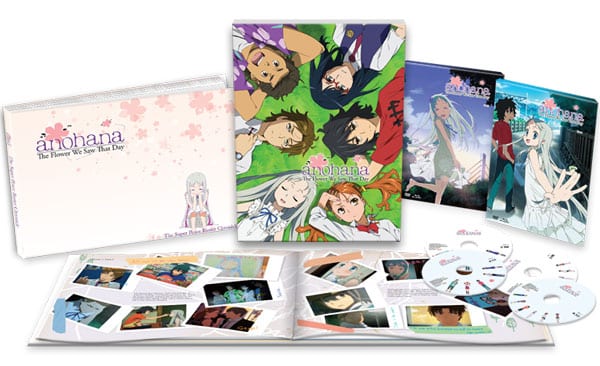 I know at least several people who upon reading this will be “dancing on the ceiling in joy”…. as Nippon Ichi Software America have announced that they will be releasing the complete series of anohana: The Flower We Saw That Day (Aka. Ano Hi Mita Hana no Namae o Bokutachi wa Mada Shiranai) on the 3rd July 2012. The series will be released as part of a 2 Blu-ray, 2 DVD Premium Edition set with the following goodies included:

As with all their anime releases, this will only feature the original Japanese voice acting with English subtitles. It will come with a current MSRP of $69.99.

About anohana: The Flower We Saw That Day

Jinta Yadomi and his group of childhood friends have become estranged after a tragic accident split them apart. Now in their high school years, a sudden surprise forces each of them to confront their guilt over what happened that day and come to terms with the ghosts of their past. With their childhood friend Menma back in their lives, the “Super Peace Busters” put their personal issues aside and work together to grant her one true wish. But to do it right, they’ll have to overcome years of shame, hard feelings, and heartache.