Read or Die: The TV 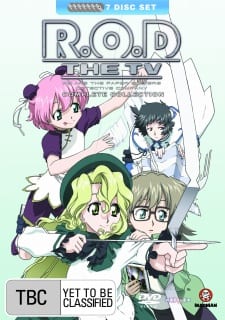 It has been a while since I last reviewed an anime not released within a month or two of the review, so I decided I would review a title I recently got my hands on, Read or Die – The TV – released by Madman Entertainment in Australia which has shaped up to be a very interesting series overall. Late last month I posted a list of hints about anime series I would be reviewing and this represents my first hint – “#1 Who needs Magic when you have Paper?”. So just what made this series appealing? Read on to find out in my review of Read or Die.

In Japan, a novelist is dealing with writer’s block after her friend goes missing. In Hong Kong, three sisters who are masters in the use of paper, run their own detective agency. When these people are brought together a bond greater than blood is formed; a bond that will be sorely tested by the evil powers intent on taking over the owrld. Join Anita, Maggie, Michelle and Nenene as they travel the glove in order to save the world from the evil mastermind, Mr. Carpenter. Of course, this is if they can find the time to put down the books they are reading. 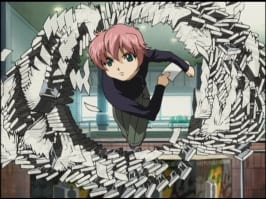 Read or Die -The TV – is a television sequel to a three part OVA series that provided some backstory that you might otherwise struggle to pick up with just this release. Unfortunately, looking at both North American and Australian distribution channels the only way of actually getting your hands on the OVA is to purchase a $160 dollar blu-ray set from North America which is a bit pricey for three episodes. You will be happy to know however that while the backstory is sort essential to fully appreciate the second half of the plot, they do give you the essential bits and pieces as you go along. But enough of being negative as this series has much to offer.

The story follows three sisters, each of who with distinct personalities who are hired to look after Nenene Sumiregawa, a world famous novelist who despite not writing for many years due to the disappearance of her friend – manages to get herself into some strife with death threats following one of her books becoming a movie. It just so happens that these three girls are not just your ordinary bookworms or detectives but Paper Masters who can bend the will of paper to do anything with them from creating monsters to attack a foe or even becoming as sharp as blades themselves. From there, these four alternate between a normal happy (??) life to one where they and their friends may be at risk all in a conspiracy involving the British Library, A set of mysterious books and a long lost Paper Master friend who has been in hiding these last few years. 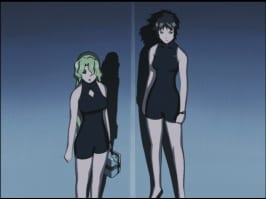 I really did enjoy how they gave us the best of both the peaceful and satirical life of the three girls boarding with Nenene in the first half of the series, with some included action scenes now and again as they ease the viewer into the plot behind everything, and the more serious action-based plot where they are under attack from all sides, allegiances are tested and shuffle frequently and shows just how powerful the “literary superpowers” of the world are and how far they will go to ensure all information and history flow how they want it.

While they did take a few episodes to provide what may be constituted as “filler episodes”, I was left with the impression they were more to develop the characters for later episodes and to also develop the relationships between not only the four girls, but the other characters who appear later on such as Yomiko from the R.O.D OVA and the mysterious boy Junior who pops up relatively early in the series. While all the characters had their important roles, I was left thinking that Anita (The youngest sister) and Nenene had more character development both between themselves and with others than Maggie and Michelle who themselves could have used more development. 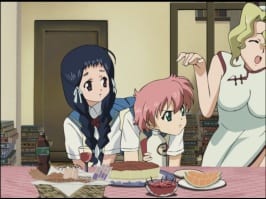 In terms of design, while it is a shame the series is limited to a 4:3 aspect ratio, the quality of the animation and designs are very high. The characters are relatively well designed even if they occasionally toe the line on the number of unique hair colors but on the other hand usually well detailed. The environments were also very impressive and especially in the more action-oriented episodes… the level of detail to both battle environments and the buildings/areas they take place in are brilliant. At the very least in terms of environment design you can say that they have perfected designing and implementing books as decorative objects.

In terms of battle animation they are both wonderfully animated, fast-paced and effectively use the unique element of using paper as weapons to their advantage by just not flinging it at people but with every battle treating us to a new way to use paper. A good example was the first battle in the first episode –  making use of the setting (A book store) to stop someone from setting off explosives by attacking said culprit with a stack of books, restraining the culprit with a paper beast and isolating the store from the explosion by shooting it outside the building. Character animations outside of battle were a mixed bag but overall still solid – with some of the actions (Especially of Michelle) seeming a bit too comedic for the mood…. and then there is their overuse of the rosy red cheek looks whenever a character seems to be emotional. Either way, I was more than satisfied what was presented in this series and it should not disappoint. 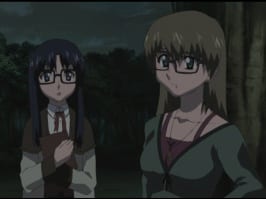 In terms of Opening or Ending sequences, neither were overly stellar but there were some merits to the opening sequence which had rather creative animation to go with the instrumental “battle” track R.O.D by YKZ. Both the OVA and the TV series share the same soundtrack, only with the TV series having an extra two discs worth more (According to the OST releases) and I have to hand it to Taku Iwasaki… he did a brilliant job. Coming with a mixture of techno, light hearted music and suspenseful music – he equipped the series with an extensive repertoire of tracks which should appeal to most watching it.

The voice acting is not the best I have heard lately however still does a more than appropriate job at delivering the emotions and personalities of the characters with my highlights of this series going to Rachel Hirschfeld as Anita King, Wendy Tomson as Nenene Sumiregawa and Hellena Taylor as Yomiko Readman (Also responsible for voicing Bayonetta in the game Bayonetta). On another note, most of the British Library characters come across with brilliant British voice acting (I seem to have a real soft spot for it). 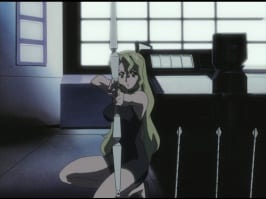 In terms of included extra content, these are the original seven discs that were originally released in volumes. Therefore, each of these do contain trailers of older series – not all of which Madman Entertainment stock anymore. Also included is Promotional Trailers, Art Galleries, Clean Opening and Endings, Commentary and Japanese Next Episode Previews with English commentary over them to name a few. While I will admit I haven’t dived that much into the extra content, I did listen to one of the commentaries and it was very interesting – giving most characters the chance to appear in at least one of them.

Personally, while this collection is lacking the OVA episodes to make this a complete set, I think it was a very enjoyable series well worth commending. For those who might only be buying the newer anime releases, I strongly encourage you to check out your local stores or alternatively, the Madman Entertainment (and Siren Visual) online stores to see some of the older titles they have to offer as even though they are older… they still have much to offer.