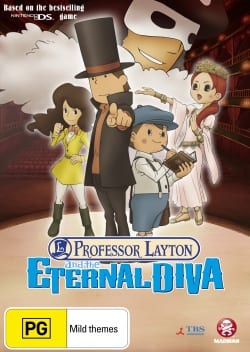 Title: Professor Layton and the Eternal Diva
Published by: Madman Entertainment (Australia / New Zealand)
Based on: The Professor Layton line of games for the Nintendo DS
Genre: Mystery, Puzzle
Audio: English and Japanese Dubs
Subtitles: English
Aspect Ratio: Anamorphic Widescreen 16:9
Runtime: 95 minutes
Cost: $29.95
Classification: This title has been classified as PG for Mild Themes
Special Thanks: Special thanks goes to the Madman Entertainment PR Team for providing me with a review sample of this title.

While the Professor Layton series has proven to be one of the most successful series on the Nintendo DS… or more so one of the most popular puzzle series released on any console, I have never actually played a single title in the series. I find I need to be pretty picky with puzzle series and while games such as Catherine and Portal 1/2 offered unique concepts in puzzles no other game really offers – the Professor Layton games were more random puzzles that need to be solved. Alas, I was still interested in watching this series as it is not very often you see complex puzzles in an anime (I suppose there was that short-lived Where’s Wally series…) and overall it left me contemplating getting around to playing the games. But enough about these pre-review comments, read more to find out my thoughts on the film! 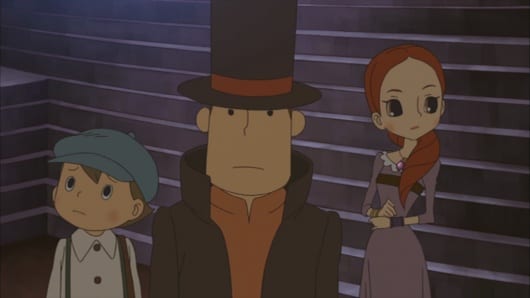 The Professor receives a letter from his old student, the famous opera diva Janice Quatlane who will soon perform at the legendary Crown Petone Opera House. She sends Layton two tickets and invites him to attend as her special guest. Meanwhile, a rash of disappearances hits London. Two young school girls are the latest victims and the Professor suspects it’s related to the strange things that are happening at the theatre. As Layton’s assistant Remi stays behind to investigate the case of the missing girls, Layton and Luke travel to the Opera House to solve their toughest puzzle yet, the mystery of Eternal Life!

The question is… how do you convert a storyline that is all about solving puzzles into an anime series that does not use external interaction to control the plot? The answer…. by shoving a whole bunch of puzzles in it anyway and let the characters figure them all out, and while some of the puzzles do sound cliche, they actually do a good job at moving the plot along. After being given the blurb about how successful the game series has been and introducing this as a sort of prequel to the events of the many games. Following the events of the theft of Big Ben, Layton and Luke listen to a record from Janice Quatlane, an earlier student of his who became a novelist and recall a past experience of a normal trip to see her at the oprah which ended up taking them on a grand adventure. Placed in the predicament where one of the guests on the “ship” could win Ambrosia to claim eternal life, they must use logical reasoning to ensure their success while also solving other mysteries such as the disappearance of young girls disappearing throughout London. 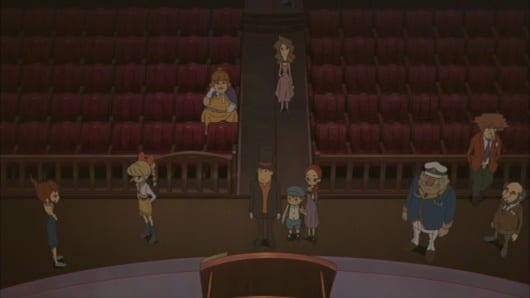 The overall storyline can be watched by anyone regardless of how much knowledge they have of the games, but they do skip over the introductions of some minor characters which seem to be more relevant to the games rather than the storyline, but that is a small trivial issue. With the exception of this one slight issue I had, the series had a good merger of both real-life mystery elements and technological advancements which generally borderline the supernatural which would perhaps make it less of a normal mystery – but diverged the plot down a path not many mystery series took and made you question just who the culprit or sub-culprits were. The plot was perhaps a bit slow at the start, but did introduce the greek mythology of ambrosia in a means that would not bore the not-historically inclined and the puzzles while not having the 100+ to match the games, managed to be cleverly thought out, didn’t take up too little or too much time each and didn’t seem like pointless means of killing off characters for the sake of killing them off. But perhaps they could have done without the “Final Boss Battle” of the film…. was perhaps a bit over the top given the implied setting of the series.

Overall, there are a few elements to this plot that could have improved it in both terms of enjoyment and the whole “mystery” element – but given what they had to work with, I think they did a solid performing job. 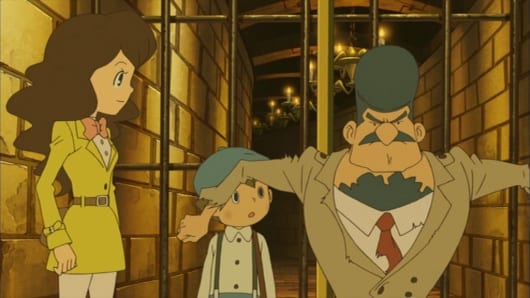 As you may no doubt be aware, the design of this film is based around that of the animated cutscenes from the games which while not being the most visually appealing out of the anime’s I have watched in the last few months, left me satisfied with what was presented no doubt aided by the experience of animation studios P.A. Works (Angel Beats!, Squid Girl) and Oriental Light and Magic (Tales of the Abyss TV, Pokemon). The environments were well designed with the occasional special effect or battle animation to boot, I felt that some of the character designs – even if they were intended that way could have been better designed. At the very least, you could say it is a unique design overall that should appeal to fans and non-fans alike.

Tomohito Nishiura and Tsuneyoshi Saito provided the soundtrack for this series, as they have for several of the game releases and I have to hand it to them… I was very impressed with what they offered. They had a mix of the softer classical tones alongside a number of suspenseful and action tracks all of which complemented each other well, which considering the series is relatively music intensive – most certainly is in its favor. Voice acting was provided by the UK voice cast for the game and as I do love British accents in my anime series (For example, the voice talent in Black Butler really made the series) I found it more than appropriate enough given the setting of the series, and the array of emotions the characters endure. Special mention goes to Maria Darling who voices Luke Triton and really captures his mannerisms. 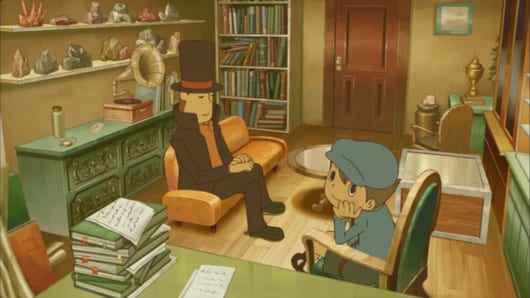 In terms of extra content you are not presented the variety you are usually presented in a Madman Entertainment feature film release, but what you are presented with is pretty much of a good quality. What is included is a look inside/introduction to the three minds behind the series and design: Level-5, OLM Studios and PA Works Studios. The three combined come in at around 22ish minutes so it is fairly detailed. Also included is a four and a half minute long video detailing the making of 3D scenes and Madman trailers for 5 Centimetres per Second (Which I recently picked up and will be reviewing soon), Evangelion 2.22, Origin – Spirits of the Past and Summer Wars.

Overall, I think if you are a fan of the series, you have no reason not to really pick it up. This could be concieved as an example of how to do a game to anime port and do it right, something which surprisingly companies are getting better and better at. I personally enjoyed it and now considering if I should go and pick up the games, something I would not really have considered if I hadn’t watched this.

Final Score
Storyline / Character Development: B
Design: B
Music/Voice Acting: B+
Packaging/Extras: B+
Personal Preference: B+
Overall Score: B
Facebook
Twitter
ReddIt
WhatsApp
Pinterest
Telegram
Previous articleA New Gust Title….. But It Comes With Teaser Images
Next articleThe Conclusion to the Mystery Will Be Revealed Next Year – Siren Visual to Release Higuashi no Naku Koro ni Kai as an Australian Exclusive Title