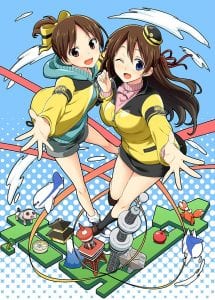 Closely following their release of all-ages visual novel A Kiss For The Petals: Remembering How We Met, MangaGamer have announced that pre-orders have been opened for Go! Go! Nippon! 2015. This title will serve as an expansion to OVERDRIVE’s original release of Go! Go! Nippon!, and will be published as both a bundle and as a standalone expansion.

Go! Go! Nippon! 2015 seeks to expand upon the original title, nearly doubling the story scenario, introducing new and improved widescreen HD graphics, and e-mote animation for the sprites. It is also possible to visit brand new locations including the Tokyo Skytree, Solamachi, Odaiba, a planetarium and Comiket.

This expansion also introduces several new events featuring Makoto and Akira.  Enjoy watching Makoto cosplay as a maid at Comiket, attend a Japanese festival with both girls, and now you can even enjoy a late night moment with each of the heroines. There are plenty of new foods to enjoy too, and you can even see some traditional Japanese glass-crafting.

Go! Go! Nippon! 2015 will be available both via the MangaGamer Online Store and Steam starting October 16 2015.

Get a taste of the foreign travel offered by printed guidebooks. Enjoy a tour around Japan from the comfort of your own home!

As the game’s protagonist, you’ll travel to famous Japanese sightseeing spots in the company of a pair of beautiful young sisters. The girls will describe the spots, take you out to dinner, and grow closer to you throughout your travels.

The thrill of taking a trip through Japan with pretty girls is the experience offered by this “Guide Game” – a guidebook in game format!