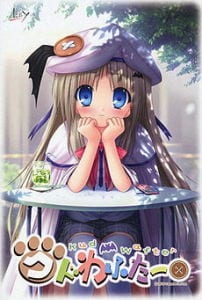 Originally released in 2007, KEY / Visual Arts released the visual novel Little Busters! which has since seen several PC releases and releases on other consoles including the Playstation 2, Playstation Portable and Playstation Vita. Much lesser known is a spin-off title also released by Visual Arts known as Kud Wafter which focuses primarily on the games main character Riki Naoe and one of the female characters in the original game Kudryavka Noumi (Aka. Kud). Despite Little Busters receiving several ports and re-releases over the years, Kud Wafter which was primarily released as an 18+ eroge has not received such attention…. until now.

According to translations by Anime News Network from September’s issue of ASCII Media Works’ Dengeki G’s Magazine, Prototype (Who have been behind all the Little Busters! console ports) will be porting Kud Wafter to the Playstation Portable under the title of Kud Wafter: Converted Edition. Given previous Converted Edition releases, this will omit most of the games eroge content but in replacements will feature brand new events and artwork.

To date no release date or price has been listed.

The Little Busters’ trip was a complete success, and summer vacation has finally begun. Everyone heads home for a bit to see their families. Everyone, that is, except for Riki (who has no family) and Kud (whose family lives in another country). One day, an accident occurs that floods the men’s dormitory, which leaves Riki with no place to stay. Luckily, Kud is willing to lend a hand, and she’s also looking for a roommate.