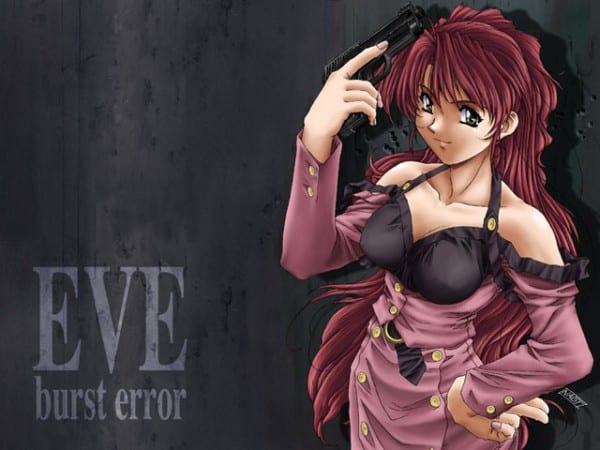 Late Hiroyuki Kanno’s acclaimed masterpiece is set to make a return with MangaGamer today announcing their newest acquisition – the mystery game EVE Burst Error. Previously released by Himeya Soft, EVE Burst Error tells the story of two detectives who unknowingly stumble into a pair of intertwined murder mystery cases. Known for its top-notch writing and multi-sight system which allows you to gain additional clues by switching characters – MangaGamer are thrilled to be able to bring this title back into print.

Storyline
In this game there are two heroes, Kojiroh and Marina, who are each called upon to solve their own cases. This game allows you to switch characters at any time to solve the mysteries these heroes encounter. This “Multi-Sight Adventure” allows you to view what’s happening behind-the-scenes from the other character’s perspective, bump into each other, and sometimes even help each other out. Together, the pair come closer and closer to the shocking truth through their combined actions and deductive skills.

Kojiroh’s Episode:
A seemingly down-on-his-luck private investigator finally gets a break, as he is hired to track down a mysterious piece of art. Even though he feels a little weird about the case, the client’s offer is huge! Despite initial success, Kojiroh finds himself drawn into an unexpected nightmare involving a string of bizarre murders.

Marina’s Episode:
Marina is a national intelligence agent with a 99% success rate. Her new assignment is to protect the daughter of a Japanese embassy official stationed abroad. As you encounter numerous attackers, you become aware of a dangerous government conspiracy at the root of all these attacks.

So when will you be able to pick this up? A few months from now? Actually…. the 27th April 2012 (GASP!) as a downloadable to own game from the MangaGamer All Ages website. This will set you back 9.95 Euros and should be compatible with all operating systems from XP to Windows 7.

ollowing an announcement by the game's long-time Playstation-console publisher Nippon Ichi Software America that many of the Danganronpa games would no longer be available for purchase...
Read more