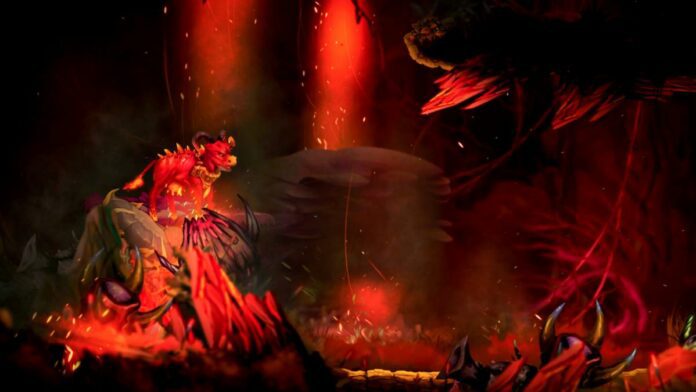 This is a game about cows. The Bulgarian development studio The Sixth Hammer has confirmed that they will be satisfying the demands of their studio’s resident cow and releasing the bovine 2D adventure platformer Moo Lander on 27 May 2022. The game is in development for PC, PlayStation 4 and Xbox One, with a Nintendo Switch version also planned for a release later in the year.

In the universe of Moo Lander, milk reigns as the supreme energy source, possessing a power second only to the stellar explosions of a dying star. Trouble is, it’s rapidly becoming scarce. The stakes for your civilization are high, but rumours of an ancient device capable of producing infinite quantities of milk have reached your ears. After hoofing it to the only functioning spacecraft your civilization has left, you set out into what is pitched as a “a gorgeous, handcrafted world full of deadly aliens and ancient taurine foes”.

Cruise over peaceful grazing fields and into sinister dungeons searching for the milk source and uncovering the secrets of the Mighty Cows. You’ll need to take stock of the situation before stampeding in. Over 20 Mighty Cows await your arrival in Moo Lander, each with their own unique abilities and personalities. Granny Toxic sends her horde of poisonous minions after you, while the Last Milkbender exercises complete control over the precious substance. Supreme Rabbit Cow uses its explosive carrots and superior mobility, honed over the centuries, to baffle its foes and stay one step ahead of the vicious, carnivorous Cowger.

Each of these antagonistic “mighty cows” are described as having their own “unique Cow AI“, which governs their behaviour. Milk sabers, dairy beams, and more are at your disposal when going up against them.

When you need a break from locking horns with the planet’s defenders, you and up to three others can play one of Moo Lander’s four Mooltiplayer modes in couch co-op or remotely via Steam Remote Play. Rustle up some friends to take on the powerful Cow AI together or throw all the chips down in fierce PvP combat. If you need something a bit more combat-free, join in the Cow Races and chase down the planet’s bovines in tense competition.

Promoted features of Moo Lander include:

Can’t resist the urge to experience some of the game’s cow on cow action? A free demo is now available via Steam and the Xbox Marketplace.