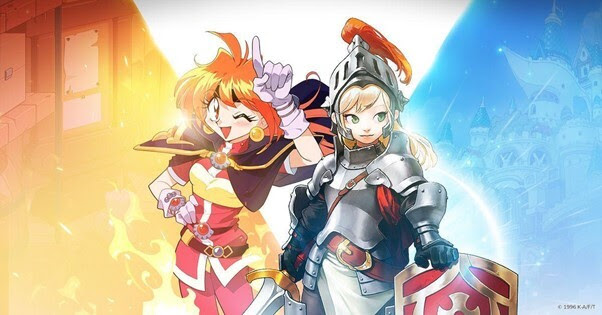 While it might not be the first anime to come to mind when you think “anime crossover” in a mobile game, but Kakao Games and Kong Studios has confirmed that a new crossover between their smartdevice action RPG Guardian Tales and the Japanese anime series Slayers NEXT is underway.

Adapted from the fantasy light novel series of the same name, the Slayer franchise features main protagonist Lina Inverse, a teenage sorceress battling against the forces of evil set forth by the Lord of Nightmares. The Slayers universe has been adapted across a multitude of media platforms over the years. This commenced with Hajime Kanzaka and Fujimi Shobo’s ongoing light novel in 1989, spawning a spin-off series, manga adaptations, anime seasons, films, video games and much more.

Slayers Next makes its debut in Guardian Tales with two Slayers-centric stories, showcasing a number of quests and subquests to explore. Players will have access to the main protagonist Lina Inverse, a ★3 Hero added as a Pick-up Summon Hero. Lina’s main companion Gourry Gabriev, a ★3 hero, and his exclusive weapon will be available for free via in-game event.  Part two of this collaboration arrives to the global build Tuesday, March 8th featuring the mysterious priest Xellos, a ★3 Hero Pick-up Summon Hero.

Years after the ill-fated launch of CD Projekt Red's Cyberpunk 2077, which has seen...

The development team at FromSoftware typically work on two franchises which are quite different...