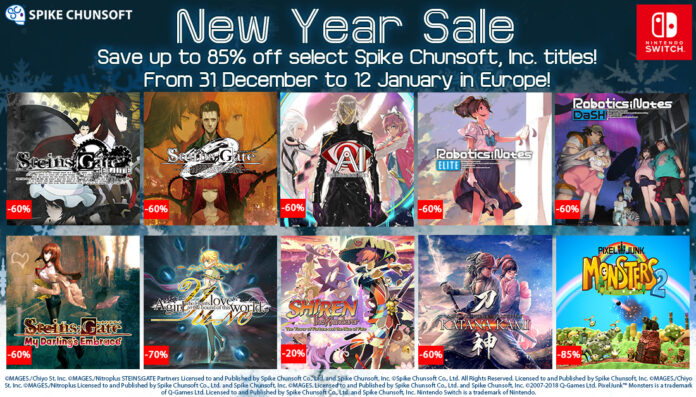 A new year means new gaming adventures ahead. But while it is good to look forward, now is also a good opportunity to go back and pick up the games of yesteryear for a good deal. From now until 12 January 2022, a number of games from Spike Chunsoft can now be picked up via the Nintendo eShop for the Nintendo Switch at a discount of up to 85%.

Although some of their very recent new releases have been excluded from any discount, visual novels such as ROBOTICS;NOTES ELITE and STEINS;GATE ELITE are discounted, along with many of their most iconic video game releases. For a full list of the games discounted, scroll down:

AI: THE SOMNIUM FILES – 60% Off
The mind never lies… In a near-future Tokyo, detective Kaname Date is on the case of a mysterious serial killer. Date must investigate crime scenes as well as dreams on the hunt for clues. From the mind of Kotaro Uchikoshi (Zero Escape series director), with character design by Yusuke Kozaki (NO MORE HEROES, Fire Emblem series), a thrilling neo-noir detective adventure is about to unfold.

YU-NO: A girl who chants love at the bound of this world. – 70% Off
Your Love Awaits Beyond This World. Can you find the hidden world waiting beyond Sakaimachi? Fall in love with every character to reach the true ending to this 40+ hour visual novel.

STEINS;GATE: My Darling’s Embrace – 60% Off
A spin-off of the beloved Science Adventure series finally got localized for the West! Fall in love with the lab members all over again in this sweet and slapstick romantic comedy.

STEINS;GATE 0 – 60% Off
A new story in the critically-acclaimed STEINS;GATE series. From the depths of despair–explore a whole new world line. Your favorite characters return alongside a brand new cast! STEINS;GATE 0 continues the time travelling theme – but adds artificial intelligence as its central hook. Help a group of young students bend time to their will and prevent the onset of World War 3.

KATANA KAMI: A Way of the Samurai Story – 60% Off
Wanderer Set DLC – 45% to 50% Off
Five Famous Swords Set DLC – 45% to 50% Off
Play as a ronin during Japan’s Meiji Restoration in the volatile Rokkotsu Pass. The swordsmith Dojima falls into debt and his beautiful daughter is taken as collateral. Help repay the debt by crafting swords by day and exploring the mysterious, twisting dungeons of the Ipponmatsu Cave for valuable materials at night.

ROBOTICS;NOTES ELITE – 60% Off
Join the Robot Club and help save the world in ROBOTICS;NOTES ELITE. Play as Kaito Yashio, one of the last two members of Central Tanegashima High’s Robot Research Club. He kicks back and relaxes as his counterpart, the reckless club leader Akiho Senomiya, strives to complete their giant robot in order to keep the club from being disbanded. But Kaito’s days of relaxation end with the discovery of the mysterious Kimijima Report. It contains instructions involving locations all across the island—and warns of a conspiracy targeting the entire world.

ROBOTICS;NOTES DaSH – 60% Off
Return to Tanegashima and continue the Science Adventure series in ROBOTICS;NOTES DaSH. The island of Tanegashima is preparing for the Summer Festival. Through Nae Tennouji, an acquaintance from JAXA, Kaito Yashio is introduced to Itaru Hashida from the STEINS;GATE series. Itaru claims to be taking a tour of the island, but as time goes on he starts acting rather strangely… Meanwhile, unsettling incidents begin to occur all around them; harbingers of an event that will again plunge the world into chaos.

Re:ZERO -Starting Life in Another World- The Prophecy of the Throne – 50% Off
Enjoy a new Re:ZERO storyline, fully supervised by the series author Tappei Nagatsuki. Featuring brand new characters designed by the original artist Shinichirou Otsuka as well as your favorites from the series.

Shiren The Wanderer: The Tower of Fortune and the Dice of Fate – 20% Off
Legend has it that Reeva, god of Destiny, holds sway over the past, present, and future. Said to dwell in the mysterious Tower of Fortune, Reeva decides the fates of all mankind with a trio of magic dice. In the latest installment of the storied franchise, no two adventures are the same as you explore mystery dungeons that change each time you enter. Learn strategies and skills to overcome what comes your way–you never know what’s next.