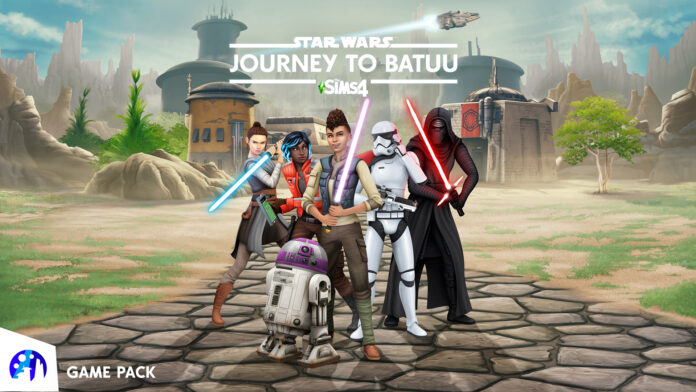 Given the close ties between Electronic Arts and the successful Star Wars franchise, something like this was bound to happen eventually. The next game pack for The Sims 4 has confirmed to be titled Star Wars: Journey to Batuu, which will see your sims leave the confines of the SimPlanet and travel to the remote planet of Batuu – inspired by Star Wars: Galaxy’s Edge at Disneyland Resort and Walt Disney World Resort.

In this Game Pack, Electronic Arts boasts that your sims will be “surrounded by the iconic sights and sounds of Star Wars including Stormtroopers, unique Batuuan attire, custom lightsabers, the bustling activity at the famous Oga’s Cantina, the interstellar hits of DJ R-3X and even the Millennium Falcon”.

Not my cup of tea personally, but for Star Wars fans, this might be worth checking out. But unless you are a TS4 completionist or really love the series, this could easily be one to miss.

Developed by the team at Maxis, The Sims 4 – Star Wars: Journey to Batuu will be available on the PC, Mac, PlayStation 4 and Xbox One simultaneously on 8 September 2020, priced at $19.99 AUD or local equivalent. This is not a standalone release, and will require, at the very least, a copy of The Sims 4 base game.

You can see more of the game pack below:

Promoted Features of The Sims 4 – Star Wars: Journey to Batuu

Create Your Star Wars Story
The Resistance, First Order, and scoundrels are fighting to control Batuu, and it’s up to players and their Sims to determine who will succeed. As Sims undertake challenges and special missions, they can gain (or lose) the trust of the affiliation of their choice, unlock rewards, equipment, new outfits and critical missions that will influence changes to the world and tip the balance of power.

Unite with Iconic Characters
Completing missions earns reputation points and helps them get closer to meeting the leaders of the forces on Batuu. Depending on the choices they make, Sims will unite with iconic Star Wars characters, including Rey and Vi Moradi (Resistance), Kylo Ren (First Order) or Hondo Ohnaka (scoundrels).

Create Your Own Lightsaber
Players will also get to explore Batuu and all it has to offer along their journey, including finding artifacts like kyber crystals and hilts to create the most coveted Star Wars artifact: a lightsaber. Once Sims collect enough pieces to construct a blade, they can build their fitness skill by training and go head to head against other Sims in lightsaber challenges.

Customize Your Droid Companion
Sims will also have a chance to visit the Droid Depot and customize their very own droid to help during missions. Droids are useful companions and can use their scanners on unknown crates, scramble control panels or distract rivals.

Bring Batuu Back Home
The fun doesn’t end on Batuu! When Sims return home, they can bring back new decor, recipes and artifacts inspired by their travels, including their lightsaber and droid, play a game of sabacc, or even host a playful lightsaber training session.