For some time now, Ark: Survival Evolved has made its home on the PC as part of Steam Early Access. After amassing approximately 9 million players pre-launch, developers Studio Wildcard have confirmed that the survival-adventure game will be officially launching both at retail and digitally on the PlayStation 4, Xbox One, PC, Mac and Linux platforms from August 8th 2017.

Distribution will be handled through several editions and channels, some of which are now available for pre-order from select retailers. In Australia and New Zealand, there will be three editions offered:

Standard Edition
PS4 / Xbox One: $99.95
PC: $89.95
This edition will include the core Ark: Survival Evolved experience and all free content released up to this point.

Explorer’s Edition
PS4 / Xbox One: $169.95
PC: $159.95
This edition contains everything in the Standard Edition, in addition to all expansions. This includes the Scorched Earth expansion (Available now) and more packs to be launched in 2017 and beyond. 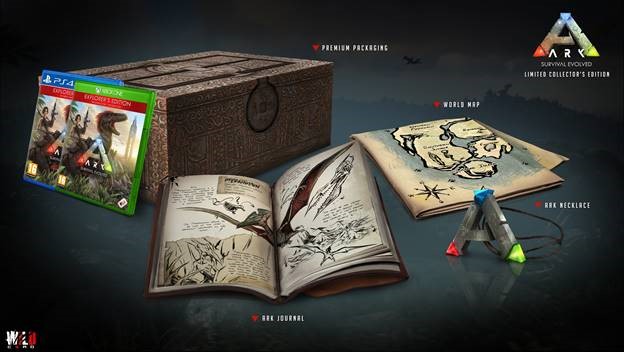 Limited Collector’s Edition
$269.95
This edition will include the Explorer’s Edition, a collectible faux-wooden chest box, and the following special goodies:

Ark: Survival Evolved seeks to take on “the survival genre with a unique blend of emergent multiplayer cooperation and competition”. Players start the game stranded and starving on the beach of a mysterious island among other confused humans. Starting their journey by hunting harvesting and building shelters – it soon becomes clear that this island is home to dinosaurs and other prehistoric beasts. But they are not necessarily threats – and by taming and training them you can fly on their backs, race with them or chase down potentially dangerous prey.