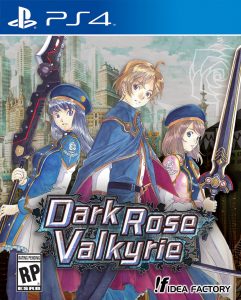 After first confirming their acquisition of the game during their annual press event in November 2016, Idea Factory International have confirmed they will be releasing Compile Heart’s RPG Dark Rose Valkyrie on the PlayStation 4 on June 6th in North America and June 9th in PAL regions.

In this game, you are tasked with leading an elite military force known as ACID (Anti-Chimera Interception Division) – an organisation with stands between humanity and those transformed by a mysterious battle. But in a twist somewhat similar to Lancarse’s Lost Dimension, you must also interrogate your teammates to determine who has been turned.

In the year 1929, a massive outbreak occurred, transforming normal people into inhuman creatures known as Chimera.

The cause: a mysterious virus carried over by a meteorite known as the Black Garnet, which had crashed into earth long ago.

At its inception, the Chimera Virus wiped out 3% of the world’s entire population. To stave off the pandemic, Japan closed its nation to the rest of the world and formed a covert military agency known as ACID (Anti-Chimera Interception Division) to combat the remaining Chimera in the country.

Over time, ACID established within itself a special unit known as Special Force Valkyrie. You must lead this force and eradicate the Chimera that remain to this day!