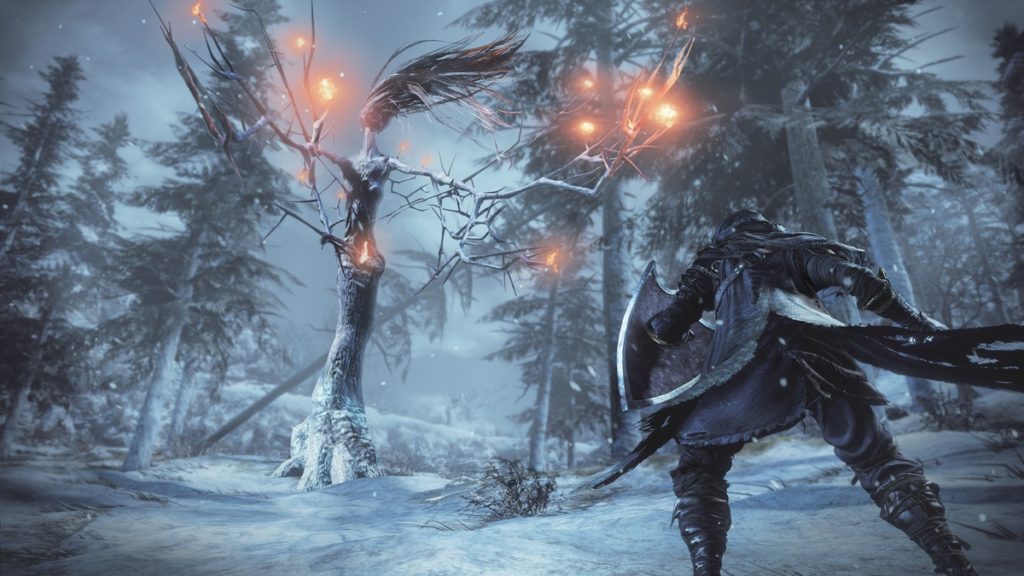 And so the torture continues….

Following their release of Dark Souls III earlier this year on the PlayStation 4, Xbox One and PC – Bandai Namco Entertainment have confirmed that the first of two expansion packs for the action RPG is now available for purchase.

Known as Dark Souls III: Ashes of Ariandel, players will be welcomed back to the mysterious world of Lothric. I imagine this welcome will once again challenge players to adapt and strategies, as they tackle enemies both new and old, and environmental hazards potentially lingering around every turn. This time around you will encounter a diseased world within a painting created to house unwanted beings. As you enter this realm, you must uncover its mysteries and defeat the evil sealed within its frigid landscape.

It should come as little surprise that this adventure will also provide players with access to new weapons, armour and spells – which will likely be beneficial as you go up against battle-hardened warriors, swarms of territorial wolves, a settlement of grotesque inhabitants and more.

Dark Souls III: Ashes of Ariandel also introduces Undead Matches, a new way to play online against other expansion owners. By entering these multiplayer matches players can honorably duel against a fellow Cursed Undead, or do battle in free-for-all brawls or team-based fights for up to five other players. Entry into the Undead Matches does not come easily though, as adventurous players must first defeat a fearsome foe hidden within the world of Ariandel.

There are two ways to gain access to Dark Souls III: Ashes of Ariandel, both of which ultimately involve forking over money. The first option is to buy it standalone on either platform. The second is to purchase a season pass for Dark Souls, which includes both Ashes of Ariandel and the second expansion pack (due in Early-2017) at a slightly reduced price.

Did you load up your Steam client earlier today, only to find a six-gigabyte update downloading for Not for Broadcast? Don't worry, it...
Read more
Video Games

Bandai Namco Entertainment's first major contribution to the next generation of video game consoles will come in the form of Scarlet Nexus, a new action RPG intellectual property for PlayStation, Xbox and PC platforms.
Read more

All Five Seasons of Yu-Gi-Oh! Streaming English Dubbed on AnimeLab