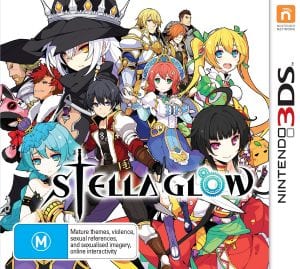 Trailing ATLUS USA’s North American release of the game by several months, Nippon Ichi Software America in collaboration with the Australian-based distributor Bandai Namco Entertainment Australia have confirmed that Stella Glow is now available on the Nintendo 3DS in Australia and New Zealand.

Like other regions, Stella Glow has received both a physical release in retail stores and a digital release via the official Nintendo eShop. Get ready to join Alto on his quest to defeat the Witch of Destruction – Hilda.

As most reluctant heroes do, Stella Glow-protagonist Alto starts as a country boy in a small town. One day, he hears a song coming from the forest (which is odd, since song has been absent on the planet for thousands of years), where he discovers the lone Hilda. But after the chance encounter, Hilda reveals she’s the Witch of Destruction, hellbent on destroying the world with her Harbingers. As Hilda is about to destroy Alto’s hometown, he and Lisette are rescued by the Royal Knights and whisked back safely to the kingdom. Alto joins the 9th Regiment for the sole purpose of gathering the other Witches to stop Hilda.