MegaTagmension Blanc + Neptune VS Zombies to Launch Internationally in April 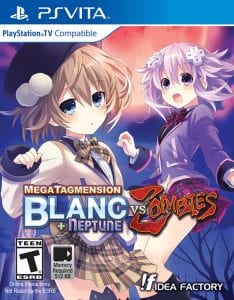 Idea Factory International might be in the final steps of porting Hyperdimension Neptunia U: Action Unleashed over to the PC, but this doesn’t mean they don’t have something new in the works. The publisher have announced that their second hack ‘n’ slash spin-off game MegaTagmension Blanc + Neptune VS Zombies is not too far off from launching on the PlayStation Vita. In fact, it will be launching on April 26th in North America, and a few days later on April 29th in PAL regions.

Co-developed by Compile Heart and TAMSoft, this latest Neptunia spin-off title has a greater focus on Blanc. Rather than Gamindustri, it takes place in Gamicademi – a historical academy renowned for educating CPUs in the ways of humans. However despite its many accolades, attendance has hit an all-time low. Therefore, Blanc and her friends decide to film a blockbuster zombie movie on its premises to garner more support for the school.

Everything’s going according to keikaku (or “plan” for those not familiar with the term) until real zombies start shuffling out of the woodworks. Can they turn this undead invasion in their favor and make the best zombie flick ever, or will Gamicademi’s Dark History consume them all?

MegaTagmension Blanc + Neptune VS Zombies features a sizable cast of playable characters who come from various dimensions in the series. They are further classified as “Senior”, “Middle” and “Elementary” students. Starting off, the senior characters are of course: Blanc, Neptune, Noire and Vert. These four will also be joined by familiar faces Uzume Tennouboshi and Plutia, in addition to newcomer Tamsoft. The Middle School characters are Nepgear and Uni – alongside Dengekiko and Famitsu who are making their first appearance since Hyperdimension Neptunia U. Finally there is Rom, Ram and Peashy in the primary division.

MegaTagmension Blanc + Neptune VS Zombies will be available for purchase on the PlayStation Vita via both retail and digital channels starting April 26th (NA) and April 29th (PAL). The game will be supported by the PlayStation TV as well.