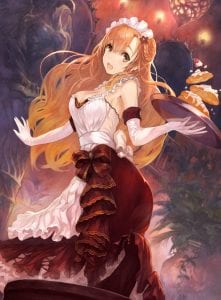 In their first update for Nights of Azure in 2016, Koei Tecmo have shared both new assets and information on the upcoming Gust-developed RPG. Set for release on the PlayStation 4 starting April 1st 2016, this game tells the stories of a land plagued by azure-blooded demons and its protector, Arnice.

When she is not roaming the streets of Ruswal fighting dark shadowy shapes, monsters, and demonic dragons, Arnice takes solace in a local hotel to rest, trade, and prepare for the inevitable coming of the next night. At the Hotel, she can buy and sell weapons and a variety of gear to aid her in battle and, after certain quests have been completed, she can trade with Lloyd, the merchant, and order rare and powerful items.  She can also pick up quests from the hotel proprietor, Simon, to earn money or various items. These quests can also provide and interesting insight into the background story of the world, which Arnice herself is oblivious to.

The Hotel is also an entrance point to the game’s Arena feature. During the game, Arnice gains entry to this arena, which can be used to hone her skills and earn special rewards.

For a further look at the game, keep scrolling down for new gameplay videos and screenshots. Also don’t forget to check out my earlier article, which details the European Limited Edition release: “Nippon Ichi Software America Begin Offering Nights of Azure Limited Edition in European Markets“.