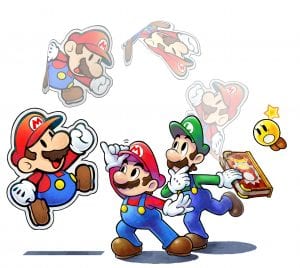 Bringing a Mario video game to their 2015 holiday season line-up, Nintendo Australia have confirmed that Mario & Luigi: Paper Jam Bros will be released in their supported regions starting December 10. Available exclusively on the Nintendo 3DS, this title serves as a crossover between the long-running and explored Paper Mario and Mario & Luigi universes.

Thanks to Luigi accidentally opening a mysterious book hidden away in Peach’s Castle, characters from the Paper Mario universe spill out of the pages and start migrating into the world of their (more) 3D counterparts. Taking control of Mario, Luigi and Paper Mario, players must solve puzzles and take down enemies in their quest to both bring the Paper Mario characters to their original world. This is in addition to taking down the duo of Bowser and Paper Bowser who are once again running amok. 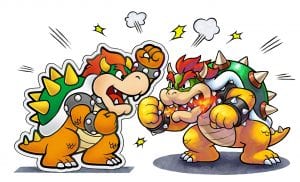 The addition of Paper Mario provides a number of new additions to the Mario & Luigi RPG system. Players can now perform Trio attacks, and can also use Paper Mario’s copy ability to create duplicates of himself (Increasing his attack powers). Paper Mario also has abilities outside of battle, including the ability to slip through tiny cracks to areas inaccessible to the three-dimensional brothers. Although many of the currently promoted features sound quite basic, it will be interesting to see if Paper Mario does provide additional versatility to gameplay, or if the new addition is more valuable to the storyline rather than the battle system.