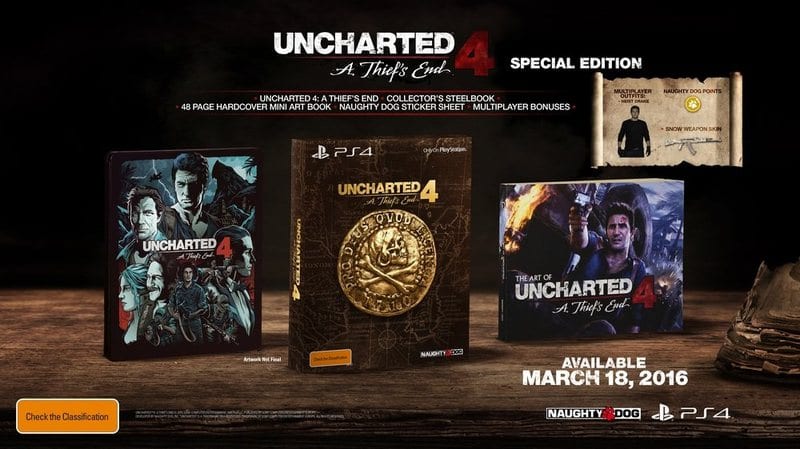 After promoting the game for some time now, the teams at Naughty Dog and Sony Computer Entertainment have announced that their upcoming adventure game Uncharted 4: A Thief’s End will arrive on store shelves and the PlayStation Store beginning March 18 2016. As has already been confirmed, this will be a PlayStation 4 exclusive title.

Now with many major titles like this, players are posed the conundrum of if they should purchase only the standard edition or go for something a bit pricier with extra goodies. Sony Computer Entertainment have announced they will be offering both a “Special Edition” (Pictured above) and a “Libertalia Collector’s Edition” – both of which can be pre-ordered from select retailers.

The Special Edition contains contains a handful of goodies including:

The Collector’s Edition contains everything mentioned above, but also:

In terms of purchasing through the PlayStation Store, Sony Computer Entertainment are offering a Standard Edition and a Digital Deluxe Edition. The standard edition includes:

Pricing for these editions will be confirmed at a later date.