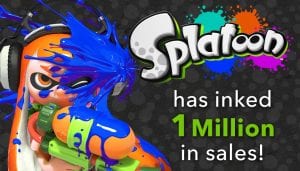 Following the game’s release on the Wii U platform starting 30 May 2015, Nintendo have announced that physical and digital sales of Splatoon have crossed the 1 million mark.

Since Splatoon launched across Australia and New Zealand on May 30, it has been great to see so many players competing in the ink battles. With the school holidays approaching, the retail Toy and Mid-year sales provide families a great opportunity to join the fun and enjoy Splatoon with the Wii U Splatoon Premium Pack and amiibo Splatoon Triple Pack.