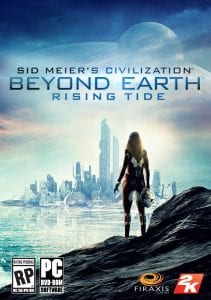 With its core game now out to market for some time now, 2K and Firaxis Games have confirmed the first expansion pack for Sid Meier’s Civilization: Beyond Earth — titled Sid Meier’s Civilization: Beyond Earth – Rising Tide. Currently in development from the PC, this expansion will introduce a number of new gameplay features and plans to offer “near limitless ways for players to create a new future for humanity on an alien planet”.

Rising Tide will expand Beyond Earth to new frontiers on the planet’s surface and across its seas, adding more choices and diplomatic options as players build “one more turn” toward a new vision for humanity’s future. New aquatic gameplay will explore the oceans for colonization by extending the play space, while an overhauled diplomacy system will provide players with additional layers of dynamic choices and options to shape the diplomatic landscape while engaging with the AI and one another. A list of key features (Supplied by the publisher) can be found below:

Sid Meier’s Civilization: Beyond Earth – Rising Tide is set for release at an unspecified date later this year. Expect to hear more information on this title in the coming weeks and months leading to launch.

Firaxis Games has an impressive track record of delivering robust and innovative expansions that radically change player experience while adding extensive replay value. Rising Tide is no exception, offering new features and overhauled gameplay systems that will challenge players embarking on a quest for planetary domination.