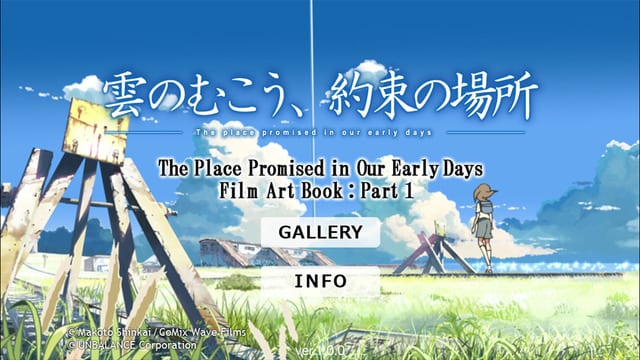 It has been approximately ten years since anime director Makoto Shinkai, known for his extremely detailed environment designs, released The Place Promised in Our Early Days. Hoping to showcase some of the artistry from this animated film, Unbalance Corporation in collaboration with Mr. Shinkai and CoMix Wave Films have released a two-part Art Book app on iOS and Android devices.

Now available for purchase through the App Store and Google Play, these apps together plan to allow viewers an opportunity to “watch the film’s story unfold” through a total of 380 sequential stills from the film, accompanied by eight tracks from the original soundtrack. Each part will contain 190 scenes and four bgm tracks, each covering one half of the film, and are priced at around $2.99 apiece.

While it doesn’t seem like this is an alternative to going out at watching the film, it does allow you to save your favourite scenes as wallpapers. If this is something that interests you, you can check out the product pages via the links below: