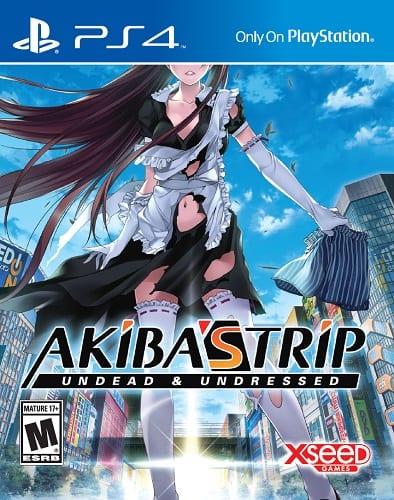 Following releases earlier this year on both the PlayStation 3 and PlayStation Vita, XSEED Games have confirmed that their supernatural action RPG Akiba’s Trip: Undead & Undressed is now available on the PlayStation 4 in North America (PAL / Australia / New Zealand to follow).

While at its core this edition provides the exact same experience as the previous editions, it also comes with a number of additional features that may appeal to some. These include the “Toybox Mode” and “Visual Editor”.

“Toybox Mode” allows players to begin the game with one of every available weapon and clothing item in-game, and seems to be tailored towards those who have already played the game. The “Visual Editor” on the other hand allows players to customize every aspect of the game’s look. It seems like this mode is more about changing the games visuals (Eg. line thickness, colour, fog, motion blur etc) instead of being able to edit the world with say… your own custom posters for the town. Other features include chat commands which allow livestreamers to directly affect the player’s experience in unusual ways, enhanced visuals and more.

With a recommended retail price of $49.99, Akiba’s Trip: Undead & Undressed can be purchased for the PlayStation 4 at select retailers and the PlayStation Store. NIS America are handling the game in Europe while Bandai Namco Games Australia is handling distribution in Australia and New Zealand.

Taking on the role of a typical but naive local student named Nanashi, who has been transformed into a member of the walking undead himself, players must use an in-game smartphone app to identify which of the outwardly human inhabitants of Akiba are Synthisters, then free them of their clothes, exposing them to sunlight and sending them to the netherworld. To achieve this, players will use everyday objects from baseball bats to comic books to motherboards as weapons, beating enemies into submission before attempting to literally grab the shirts off their backs.