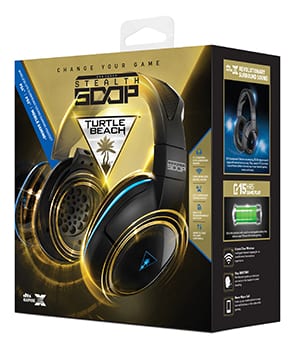 If you didn’t already think there was a huge range of headphones available on the market already, Turtle Beach has today confirmed a brand new model: Ear Force Stealth 500P, a wireless surround sound headset built for the PlayStation 3 and PlayStation 4. It is the first headset available for the PS4 from Turtle Beach with DTS Headphone: X 7.1 Surround Sound – which they are calling the most advanced, accurate and realistic surround sound available for headphones.

The following is what Turtle Beach has to say on the Ear Force Stealth 500P:

DTS Headphone:X  is an innovative new sound experience designed to make movies, music and games sound better over headphones by allowing much more discrete control over speaker position and angles than other surround sound headphone solutions. For example, most surround sound mixes put the center channel about eight feet in front of the listener perceptually, which is the default for TV and film because the dialogue is coming from the screen. With a first person shooter and many other game genres, much of the center channel audio comes from the player’s character. For example, the sound of the player’s feet walking in the snow, their inbound radio, and the sound of spent cartridges being ejected from the player’s gun. Using DTS Headphone:X, the audio engineers at Turtle Beach created a gaming preset that pulls the center channel in towards the players’ midsection, and tilts it up, to make the placement of those sounds more realistic.

The Stealth 500P includes custom DTS surround sound modes that have been finely tuned by Turtle Beach’s engineers for games, movies and music as well as a stereo mode. There are also four EQ settings that can be used with any of the surround modes, including Signature Sound, Bass Boost, Bass and Treble Boost, and Vocal Boost.

The Ear Force Stealth 500P is currently listed at a recommended retail price of $199.95, and will be available in Australia from October 30th 2014.