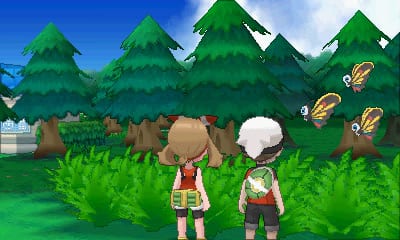 You may not be confident about this system if you missed out on the demo for Super Smash Bros. for Nintendo 3DS, but Nintendo Australia have this afternoon confirmed that selected Nintendo Club members will receive an email code for Pokémon Omega Ruby and Pokémon Alpha Sapphire Special Demo Version from October 15th 2014. The demo will then be made available at selected retailers from November 3rd.

The Pokémon Omega Ruby and Pokémon Alpha Sapphire Special Demo Version features gameplay that players won’t experience anywhere else. During the course of this early adventure, players are likely to encounter a familiar Pokémon that can now Mega Evolve. What’s more, this Mega-Evolved Pokémon can be brought into the full Pokémon Omega Ruby and Pokémon Alpha Sapphire games. Reward items obtained during the Special Demo Version adventure can also be brought into the full game. Details about how to bring Pokémon and items into the full game will be announced soon.

Both games are set to hit store shelves in their completed forms from November 21st 2014, exclusively on the Nintendo 3DS.

Unfortunately, the Continental Circus will be able to make their way to the Mih Khetto's Amphitheatre in Old Gridania this year. This...
Read more
Video Games

While they were once two of the priciest PlayStation 1 games in the used video game market...
Read more
Video Games

For quite some time now, players have been able to collect points through in-game accomplishments and spend...
Read more