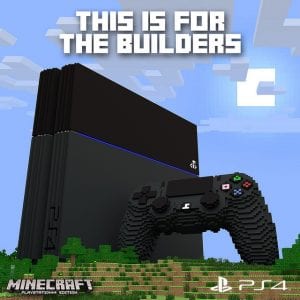 Sony Computer Entertainment Australia have confirmed that Mojang’s block-building sensation, Minecraft, is now available as a digital download game on the PlayStation 4.

Featuring the same Minecraft mechanics as earlier console versions, the PS4 edition also features worlds up to 36x bigger than last-generation console versions and supports the DUALSHOCK 4 touch pad. This support allows players to build and create with even more simplicity. Share button compatibility is also built-in, meaning that live-streamers can jump in and stream their gameplay immediately.

Already got a world built on the PS3 edition? Don’t fret about losing it, as built worlds can be transferred over through a complementary cross-save functionality.

While a physical edition will be released at a date yet to be confirmed, a digital version of Minecraft is available through the PlayStation Store for $19.75 AUD. Those who already own the PlayStation 3 edition can take advantage of a cross-buy deal, with an upgrade setting you back $5.95 AUD.