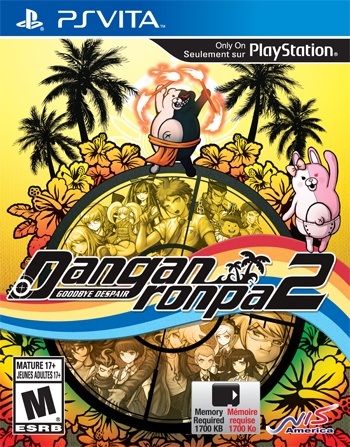 Not wasting any time in letting international gamers try out the second instalment in Spike Chunsoft’s Danganronpa visual novel franchise, Nippon Ichi Software America has today confirmed the release of Danganronpa 2: Goodbye Despair for the PlayStation Vita in North America.

Serving as a follow up to their February 2014 release of Danganronpa: Trigger Happy Havoc, the setting is shifted from Hope’s Peak Academy to the tropical Jabberwock Island. While the island may have once been a popular tourist attraction, and the new batch of “Ultimates” are initially tasked with collecting “Hope Shards” from their interactions with each other… Monokuma soon arrives to force them into another series of class trials. What was once a “heart-throbbing school trip” turns into a “heart-bleeding school trip”, where students can only escape the island through successfully murdering one of their own without getting caught.