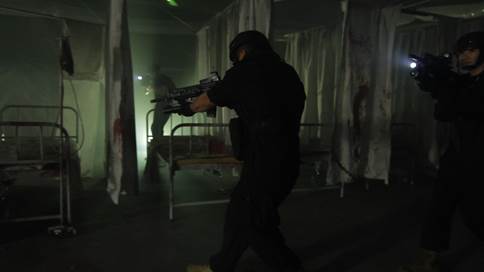 Back in 2012 more than 6,000 Aussies living in Melbourne took part in “IRL Shooter” (In Real-Life Shooter) which is posed as a one-of-a-kind, real-life zombie epidemic simulation. Following positive reception, the company behind it will be bringing the game to Sydney during August 2014.

The game titled “Patient 0” will see a 7,000 square meter warehouse meticulously converted into an abandoned underground medical facility patrolled by a horde of bloodthirsty zombies. Standing between the zombie hordes are you and five friends, armed with a mission brief, a map and the latest in infra-red weaponry. The multi-layered storyline asks teams of six participants to work together to uncover and destroy the evil parent corporation, mad scientists and genetic experiments responsible for the zombie outbreak. Each player has the opportunity to receive power-ups, health, ammo, hidden bonuses and decipher clues, while a sophisticated electronic point scoring system will keep track of each player’s body count.

In order to provide a sense of realism, the game will see 200 trained actors play the roles of different support characters and zombies, and most sporting gruesome make-up possible. The 7000sqm environment will feature all the blood splatters, missing limbs and creepy props you’d expect to find in a medical facility overrun by zombies while the range of new, state-of-the-art, infra-red weaponry with realistic noise, loading and recoil add to the realism. The weapons are even capable of affecting the building itself, being able to ‘shoot out’ lights for example, so that players can use stealth tactics to navigate certain parts of the facility.

For newcomers and returning zombie killers alike, players can opt to feel the bites of their zombie attackers with the introduction of ‘pain belts’. For the more masochist of players, these belts are worn over clothing and will emit a small but powerful electronic shock any time a player takes damage.

Below are a few provided stats about the 2012 event:

Tickets for this years event are now on sale as part of a $1,000,000 Pozible Campaign, and they claim that nearly 90% of the tickets have gone to returning players for Melbourne, which if this holds true is a relatively strong endorsement for the experience provided the first time around. Tickets are costly (Starting at $175 AUD), with options and load-outs available HERE.