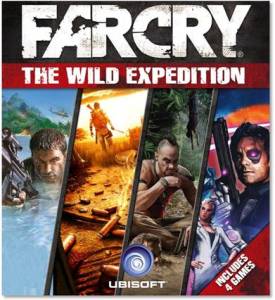 So celebrate the 10th Anniversary of the Far Cry video game franchise, developer / publisher Ubisoft have announced that they will be releasing a complete compilation called Far Cry Wild Expedition. This collection will feature all the titles currently released in the series including Far Cry Classic, Far Cry 2, Far Cry 3 and Far Cry 3: Blood Dragon.

This compilation pack will be available to purchase from the 13th February 2014 for both PlayStation 3 and Xbox360 platforms at a price of $59.95 and the PC at a slightly lower price of $49.95.

In addition to the release of this retail compilation, Far Cry Classic will be available on February 13th as a standalone downloadable title for the Xbox Love Arcade and the Sony PlayStation Network.

If you are new to the series you might be wanting to know a bit more about each of the games before making the plunge right? Below is what you should expect to see when picking the collection up on any of the consoles:

Far Cry 2 – Caught between two rival factions in war-torn Africa, you are stricken with malaria and forced to make deals with corrupt warlords on both sides of the conflict in order to hunt down your mark – The Jackal.  This version includes the full single-player campaign and Multiplayer.

Far Cry 3 – Beyond the reach of civilization lies a lawless island ruled by violence and human suffering.  This is where you find yourself stranded, caught in a bloody conflict between psychotic warlords and indigenous rebels, where your only escape is through drugs or the muzzle of a gun.  Includes the full single-player campaign, Multiplayer, and Co-op modes.

Far Cry 3: Blood Dragon – The year is 2007.  It is the future.  You are Sergeant Rex Colt: Mark IV cyber Commando.  Earth has been ravaged by a nuclear war, which erupted in the 90s. Get the girl, killthe bad guys and save the world.  Includes the full single-player campaign.