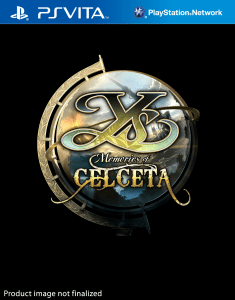 Namco Bandai Games Australia in collaboration with PAL region license holder Nippon Ichi Software America have announced that they will be releasing Ys: Memories of Celceta to retailers across Australia and New Zealand from the 21st February 2014. This Playstation Vita exclusive release will initially only be available at retail, followed by a Playstation Store release on the 25th February 2014.

In Ys: Memories of Celceta, developer Falcom revisits the land and characters of Ys IV – which for the first time is available outside of Japan. This re-envisioning of the fourth installment in the Ys series takes a brand new approach, changing and framing the story of Ys IV within an all-new tale of conspiracy, deception, and mystery. Featuring an updated version of the party-based battle system from Ys SEVEN, as well as the largest and most varied overworld in series history.

Those in North America can already check out this release, published by XSEED Games.