PETA Release New Pokemon Parody Game to Stop McDonalds From Using Pikachu Meat…. or Something Like That

In recent years PETA have become a critic of video games, releasing parody browser games surrounding Pokemon Black / White, Super Mario, Cooking Mama and also having a go at Ubisoft Montreal for including historically accurate whaling in Assassin’s Creed IV: Black Flag. Ubisoft responded to the latter claim with the rebuttal that they do not condone illegal whaling just as they don’t condone a pirate lifestyle or poor hygiene, plundering, hijacking ships or over the legal limit drunken debauchery.

Having grown up playing Pokemon games, asides from the general RPG mechanics which you can’t really isolate the franchise for having, the messages about friendship and loyalty to ones Pokemon companions were sometimes excessively strong. However with Pokemon X and Y just around the corner, PETA have chosen to highlight one key fact…. apparently McDonalds uses / would use Pokemon meat in their burgers – or something like that. Their new browser game Pokemon: Red, White & Blue sets you as Pikachu, Miltank (and apparently Jigglypuff / McDonalds mascot Grimace WHO IS NOT A POKEMON) to rescue tortured Pokemon from people like McDonalds, McDonald’s Customers etc.

They declare that “For generations, humans have loved Pokémon, but if Pokémon came to our world and saw how we treated animals, would they love us back?“. The overall message? To convince people to give up their meat-eating ways and become vegan. 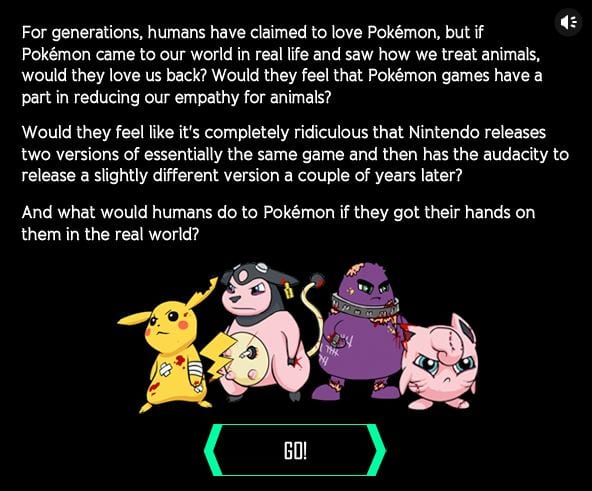 Of course according to the intro screen, the game COULD also be a rant about there being so many different editions of Pokemon to choose from given the middle paragraph.