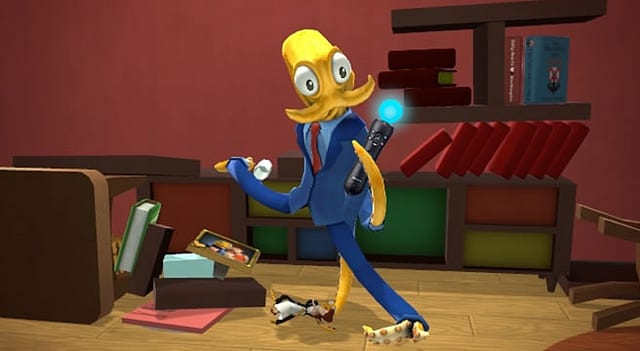 Following their release of free-to-download title Octodad (Which featured in the second installment of “Sam’s Quest for Something Different“), Young Horses have decided to not only bring its very tentacley sequel to the PC but also the Playstation 4 system as a paid title.

While one of the games charm points is its frustrating control system where without basic bone structure Octodad pretty much goes flinging himself everywhere, they have decided to give players another option of control via the Playstation Move controller. In a post on the official Playstation Blog, the games producer and programmer Kevin Geisler claims that the team had been itching to tamper with motion controls for a while, and since Octodad is a game about wiggling your tentacles in 3D space, involving the player’s body to them has always seemed like a perfect fit. The games current setup only requires the use of one Move Controller, with the front move button corresponding to the right left leg and the back trigger for left.

Kevin Geisler concluded his article with the following:

When we first started thinking about PS4 development, we were worried we’d be stretching ourselves too thin adding another platform. But porting to PS4 was surprisingly quick, and since we’ve got it running in ship shape, we’ve been able to experiment with unique features like PlayStation Move. We like to wet our beaks on crazy new experiences, and nothing floats our boat like a fresh control scheme. We’ve had a blast playing with the Move, and we hope you will, too!