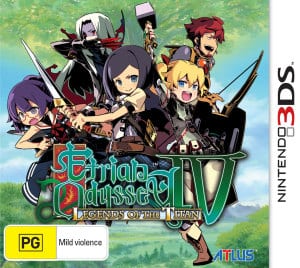 The outland city of Tharsis… in the uncharted territory beyond that city stands a giant tree called Yggdrasil. Legends say that something sleeps within the Yggdrasil that calls people to eternal paradise. In order to ascertain the truth of this legend, the Count of Tharsis issued a challenge across the land. “Reach Yggdrasil and uncover the truth!”. That summons has drawn countless explorers to the city. You are among their number; a pilgrim to the city with little to your name but a blade and boundless curiosity. Nevertheless, you aim to solve the mystery of Yggdrasil and win both fame and fortune!

The very first Etrian Odyssey game was released in PAL regions including Australia  around the middle of 2008. Despite subsequent releases within both Japan and North America, there had remained a half-decade silence on the series in PAL regions until out of the blue Nippon Ichi Software America came to the rescue and picked up the series again – starting with Etrian Odyssey IV: Legends of the Titan.

I reviewed the first installment in 2009 and came out with mixed impressions, so after expanding my experience with RPG’s and with the development team having to several years to refine their work… I was left curious about what to expect. How to the resulting product turn out? Read more to find out!

Unlike the fifth installment in the series “Etrian Odyssey Untold”, Etrian Odyssey IV does not make use of any named characters and may be considered disappointing to those who have entered this game expecting an enthralling RPG storyline. Instead the game follows a party of five custom characters who are pretty much devoid of any personality unless you imagine their respective roles in your head. As mentioned in the above synopsis, the storyline implies that you have entered the outland city of Tharsis in response to a summon by the Count.

The party have been lured to the prospect of potential fame and fortune for those who manage to make their way to Yggdrasil, a giant tree that stands at the rear of an uncharted labyrinth filled with mysterious dungeons and giant beasts.

While Etrian Odyssey IV’s plot is simple, it may have made for an interesting plot foundation. Unfortunately given the custom party member limitation imposed it never reaches its potential, and was pretty much there to warrant continuation of gameplay than delivering the next RPG epic filled with emotion, conspiracy and talking yet adorable mascot characters. Despite the party members being silent, there is still a sufficient amount of dialogue and plot progression to warrant what they have tried to achieve.

Side characters interact between themselves and while some of the quests can be cliche or repetitive, players are often rewarded with some backstory and occasionally some additional dialogue during it. I look forward to seeing how Etrian Odyssey Untold with its more storyline-oriented mode changes the dynamic of the Etrian Odyssey games.

In my review of the very first Etrian Odyssey installment, the area where the game suffered the most was the graphics quality. I claimed that they came across as being “blandish” with a few of the small gems being the character designs and the static backgrounds in menus. At first glance there is very little change – the character and enemy designs are still of impressive quality, the town artwork is great and after a while dungeon designs can come across as being repetitive and bland. The biggest change however is that with my deepened knowledge of the “first-person dungeon crawler” genre I really enjoyed it.

While there are very few visual landmarks to know guide your way without looking at the “Draw it Yourself” map mechanics, the labyrinths are visually stunning to behold (to an extent) and having a greater variety of dungeons mean’t the novelty wore of less with a greater variety of dungeons to access. While this issue is subjective, I found the 3D effect used in this title put far too much of a strain on my eyes and spent most of my time playing with slider set to 2D. From what I could tell the game loaned itself quite well to the 3D effect.

From the intense battle themes to the varied dungeon tracks, Etrian Odyssey IV provides a sizable soundtrack that while coming in as repetitive at times still offers a great selection of tracks for almost every occasion. This makes up somewhat for the once again lack of voice acting in either Japanese or English.

The same core gameplay mechanics in Etrian Odyssey don’t seem to have changed much over the years. You begin the game by arriving at the Tharsis Adventurer Guild where you can recruit a party of up to five fellow adventurers to take on the quest. There are initially seven character classes available – ranging from the standard classes such as Landsknecht and Medic to some of the less cliche RPG classes such as Dancers and Nightseekers although this number expands to ten as the game progresses. There is a sizable foundation of character classes to work from the get-go with and many practical possibilities. There is also the option to create additional characters and keep them in reserves, with the games levelling system working with this system well provided you have some extra time on your hands to level more than a standard set of five.

Once you have formed your bandwagon of adventurers and acquired your own airship, you are given free reign to travel around the different areas you unlock and uncover the dungeons scattered around them. Each area of the world is generally segregated and requires the completion of a major dungeon quest in order to unlock – drawing you closer to the Yggdrasil tree. Aside from uncovering different dungeons there is also the option to harvest food and other resources you come across, battle some giant and highly dangerous enemies (Such as kangaroo-like creatures that can easily wipe out our party in a punch or two at the start) and occasionally come across another airship with a request to complete.

One of the major appeals of the Etrian Odyssey series is that because all the areas you visit are uncharted… you have to draw the map yourselves.Given that the entire dungeon crawling aspect is completed through first-person mechanics and visuals leave little in the way of landmarks, mapping is surprisingly a key element to determine if you will defeat a challenging boss or not due to the plethora of shortcuts littered around each dungeon. The auto-draw feature returns for the spaces your party move to, however walls and landmarks need to be marked in by yourself. I wouldn’t call it a “fun” feature but it was a well implemented feature.

While navigating around the map, you will be faced with both random encounters and major FOE’s (Formido Oppugnatura Exsequens). The FOE’s are often placed on the map when in close vicinity and given their usual difficulty require the identification of their movement patterns to dodge / use to your advantage or at times need to be defeated to clear the path. The battles themselves take place using turn-based battle mechanics. On the outset there is nothing too detailed about this battle system, with characters depending on their class having access to a standard attack ability as as well as skills, magic and items. Battle participants can also make use of two battle rows, with the front usually taking the brunt of the enemy attacks for added strategical effect – following the cliche pairing of high defense in the front and lower defense characters in the back.

The system also makes use of a BURST system which allows characters to build up a gauge and eventually unleash powerful skills upon the enemy or themselves. At the start of the game this just comes across as a mildly convenient feature but grows in importance as the game progresses.  Despite the simplistic battle system, the game really shines in its difficulty. While they offer a Casual Mode which can still result in more than a fair share of entire-party KO’s (but no Game Over’s unlike the standard difficulty), for the classic players who are after a challenge you shouldn’t be disappointed. Leveling your characters is done through a series of skill trees to unlock skill and stat boosts, with several ranking tiers based upon level and options available to create different characters even in the same class – especially for those who prefer two or three Runemasters for example.

A shortness of spare change to purchase items and equipment is also possible, and some grinding is required for both money and levelling even on non-casual difficulty. There are other little systems and features you may obtain during your adventures, but overall I was relatively happy with the gameplay provided and it offered many hours of enjoyment.

First person dungeon crawlers are not for everyone, and lack the visuals and certain mechanics available in a third person RPG (It is like comparing Persona 1 with Persona 4 in a way with each having a very different appeal). Despite disliking the first installment of Etrian Odyssey for reasons I now appreciate it for, I found myself drawn to the classic RPG mechanics and strategic planning required to make my way through Etrian Odyssey IV: Legends of the Titan. An fantastic soundtrack and some interesting visuals didn’t go astray either with the Casual difficulty setting potentially opening up the game for a more casual crowd.

If you have been after an RPG on the Nintendo 3DS for some time… this might just be the catch for you. Let’s just hope Nippon Ichi Software America continue to commit themselves to publishing ATLUS USA localized titles in PAL regions. Etrian Odyssey IV: Legends of the Titan is now available for purchase in a number of European regions, with an Australian release slated for the 12th September 2013 thanks to both NIS America and Namco Bandai Games Australia.