While it is usually Nippon Ichi Software America who license most of Compile Heart’s video game developments for international release, there are a few exceptions which usually fall in the territory of Aksys Games. Aksys Games announced a couple of months ago that they had licensed the dungeon crawling RPG Sei Madou Monogatari which will be released with the localized title Sorcery Saga: Curse of the Great Curry God.

It has been confirmed that while the PS Vita RPG will be receiving a usual standard edition, Aksys will be throwing together a “Hot and Spicy, Everything Nicey Limited Edition” which will come with everything you need to eat some delectable curry… or display proudly as an interesting novelty item. The set comes with: 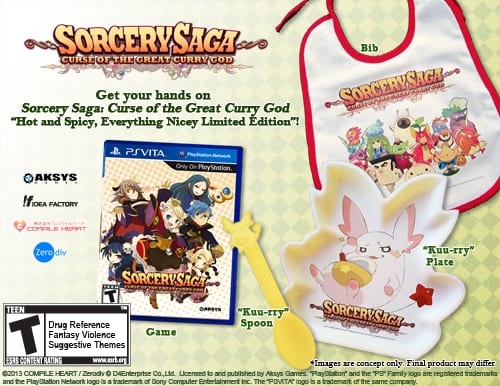 Straight from the first tower comes Kuu, the always hungry little critter with an attitude! Not only is it “Kuu-shaped” to perfection, but it also features the ever-present companion emblazoned on the surface of the plate!

Can’t get enough of Kuu? Well, you’re in luck because along with that awesome curry plate, the limited edition also includes a Kuu-shaped spoon! Colored a cheer-inspiring yellow with the almighty Kuu and the Sorcery Saga logo debossed on the handle!

Sorcery Saga: Curse of the Great Curry God features an array of wacky, sometimes cuisine-inspired critters that run amok in the dungeons you enter. Why not create a bib out of them?! Featuring many of the monsters and trigger-happy creatures you will face in Sorcery Saga, the bib completes the Sorcery Saga Limited Edition Set!

Don’t know much about Sorcery Saga: Curse of the Great Curry God? Below is a basic synopsis and list of promoted features of the game. Currently it is set for release in early-2014.

What a day. After acing her final exam, Pupuru earned the right to fight her way through her school’s Magic Tower and claim the magic orb hidden within. However, instead of finding a round magic-thingy, she encounters a strange creature she names Kuu. After a series of misunderstandings, Pupuru finds herself suspended from school, and barred from attending her graduation ceremony. Now with too much free time on her hands, she is drawn into a dispute between her friend’s curry restaurant and the big, bad curry chain that just entered town.

While coming up with a hare-brained scheme to save her beloved Smile Curry™ she encounters a young girl named Puni, an enigmatic young woman with the ability to read the curry auras of those chosen by the Great Curry God. Along with Kuu, Pupuru begin her quest to save her friend’s restaurant by searching for the ultimate ingredients to make the “Legendary Magic Curry,” a curry like no other! Maybe…

A Wacky Rogue-like Dungeon Crawler RPG – While the characters of Sorcery Saga: Curse of the Great Curry God may be cute, the gameplay is pure “rogue-like dungeon crawler” fun! Get ready for some intense action as you enter dungeons, collect items, and look for ingredients for the legendary curry! But be warned, if you fall in a dungeon, all of your items and even the levels you have accrued will disappear and you’ll need to start all over again (it’s a rogue-like after all!).

A Cast of Crazy (and just Crazed) Characters – From the mysterious and non-committal Puni and her Puni-radar and the irritatingly gluttonous Kuu, to the uber-creepy evil lord Gigadis, you can be assured that everyone you encounter will be…different…in their own special way.

Behold! the Power of Curry! – Need a quick boost to help you conquer even the most challenging of dungeons? If you have the recipes and ingredients, you can make delicious, stat-boosting curry in any dungeon! 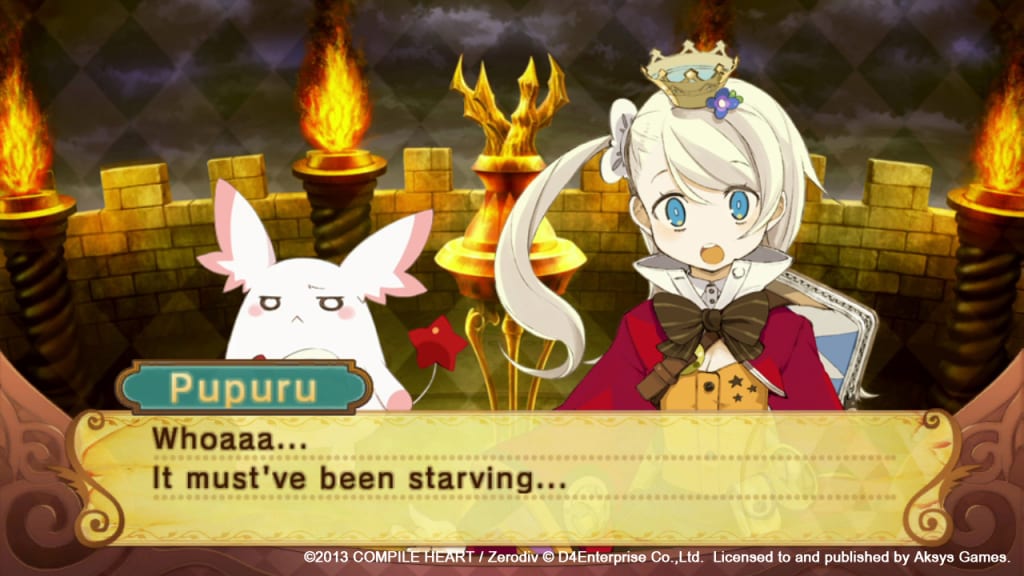