Only a few months after their latest expansion release “Odyssey”, CCP Games have unveiled that their 20th free expansion for EVE online will be titled EVE Online: Rubicon, and shall go live on the game servers from the 19th November 2013. They hope that Rubicon builds upon ten years of constant subscriber growth and its latest and most successful expansions – Retribution and Odyssey.

Rubicon is set to represent the defining moment when the scales of intergalactic power will shift irrevocably to players, the immortal capsuleers. It expands the autonomy that EVE’s pilots have over their massive game universe at the expense of its four main factions and gives them a greater arsenal with which to build up and tear down the alliances within. In EVE Online: Rubicon, empowered players wage guerilla-style warfare against their opponents, raid their space and erode industrial power from deep behind enemy lines. Focused on individual and small fleet activity, new quick-strike options offer a powerful war tactic and a fresh style of victory in EVE’s “sandbox” universe.

This November will also see a new set of mobile, player-owned structures created to support action outside of the safety of the hangar. Meant for both solo and group use, they accentuate and diversify gameplay for pilots seeking to find their homes amongst the stars.

Rubicon continues where Odyssey left off with new exploration content and a versatile new line of faction ships that are perfect for navigating and infiltrating the nearly 8,000 solar systems of the EVE Universe. In addition, the Marauder, Electronic Attack Frigate, Interceptor and Interdictor class hulls head back to the shipyards for re-engineering amongst other balancing changes. New certificate and ship identification systems will help novice players ease into one of the world’s most deep games and give veteran players a greater sense of what to accomplish next.

Twenty expansions in ten years is an amazing milestone built on the shoulders of our legendary player community. With Rubicon we are beginning an ambitious journey for the next several expansions of EVE that will end up with players taking control of the most potent technologies in the universe and controlling space on an unprecedented scale. Their insatiable desire for impact and adventure fuels both this vision and our passion for making the largest science fiction game universe.

BREAK FREE FROM THE EMPIRES

Control Hi-Sec Customs Offices – The power to tax the flow of resources harvested from planets in high security space has been wrested from the Empires and is now under Capsuleer control. 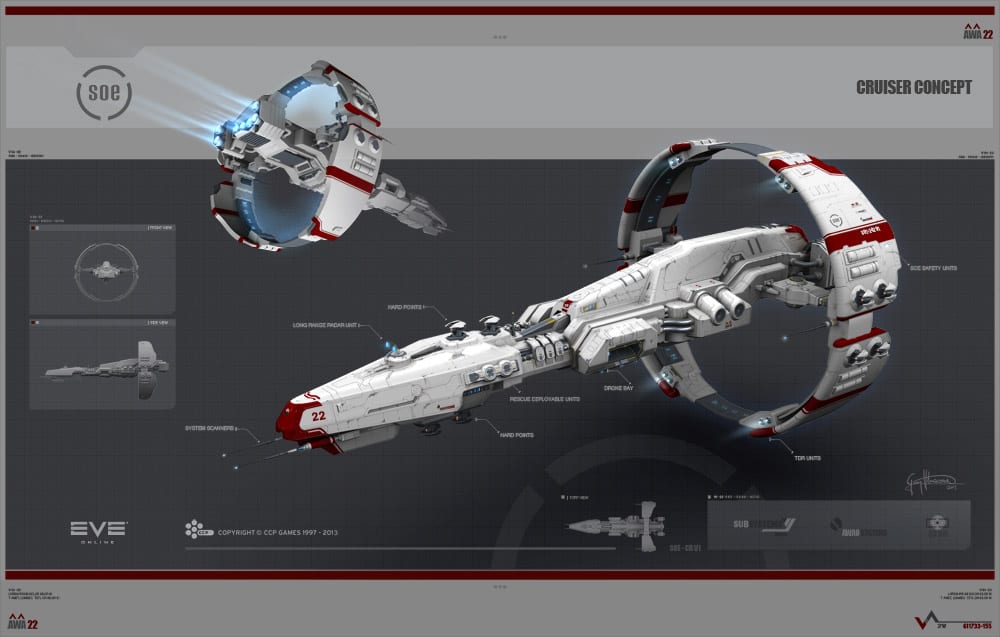 REACH BEYOND THEIR GRASP

Sisters of EVE Faction Ships – Branching out their efforts to aid the immortal pilots, the Sisters of EVE have added shipbuilding to their portfolio, introducing a line of new ships designed to support extended, discreet travel in hostile areas of deep space.

Ship Re-balancing – Evolving ships to keep them competitive in a progressing universe is an ongoing process. Interceptor, Interdictor, and Marauder class hulls head back to the shipyards for re-engineering, among other balancing changes.

Guerilla-style Warfare Support – Tactics to chip away at the behemoths have surfaced, allowing small fleets of mercenaries, saboteurs and troublemakers to become cause for concern for even the most reinforced of alliance strongholds.

Interbus Ship Identification System – A long and treacherous path lies ahead, and Interbus is here to help pilots, new and seasoned, plan the ships and skills they will need with an intuitive guide and a redesign of the EVE certificate system.

Even more additions are to be announced in the coming weeks.