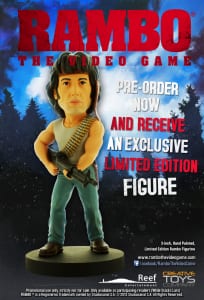 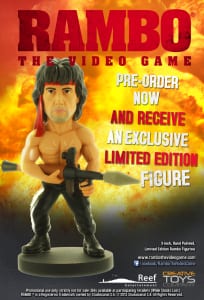 UK based video game publisher Reef Entertainment have confirmed their plans in regards to preorder incentives for Rambo: The Video Game. They will be offering purchasers from select retail outlets a choice of two limited-edition 3-inch figurines based on the images of John Rambo from First Blood and First Blood Part II. Each figurine will feature authentic likeness, costume and weapons.

Developed by Teyon, Rambo: The Video Game is set for release on both the Playstation 3 and Xbox360 consoles later this year.