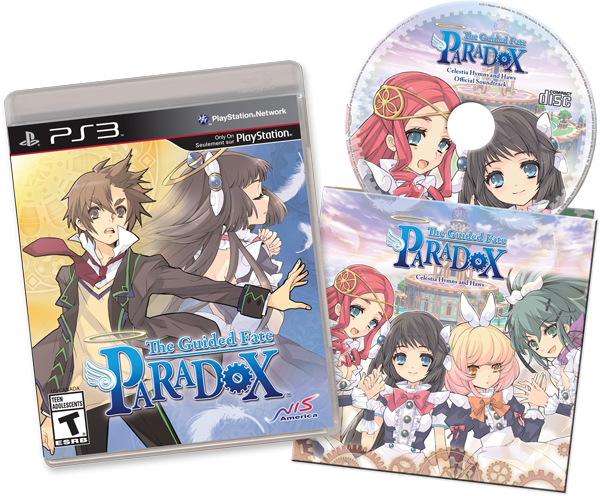 North America based video game publisher Nippon Ichi Software America recently announced that the third of their February 2013 announced titles, The Guided Fate Paradox, would be released in North America from the 5th November 2013. However up until this point in time, no European / PAL region release date was confirmed for the title.

It has now been confirmed that following recent trends, that The Guided Fate Paradox will be released in PAL regions prior to North America, more specifically on the 25th October 2013.

It has also been confirmed for those of you who are just after a standard edition of the game, that all first print copies will come with a bonus soundtrack CD as pictured above – however there is a chance this will only be available in North America.

God has never had it so rough!

Meet Renya, who happened to become God through a lottery. And then, his self-proclaimed personal angel named Lilliel took him to Celestia right away. Together, they will tackle countless randomly-generated dungeons in this story-driven rogue-like RPG in order to guide the fate of all mankind to a revolution!

Featuring the beautiful artwork of Noizi Ito — the illustrator behind The Melancholy of Haruhi Suzumiya and Shakugan No Shana — this game is sure to bless you with a rapturous roguelike experience with HD sprites!