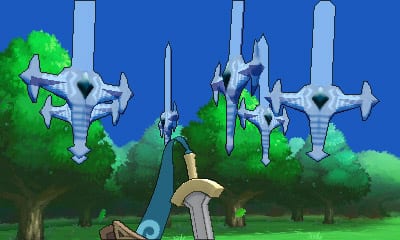 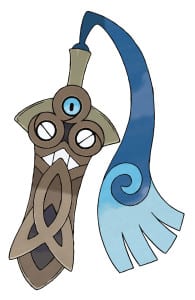 While we are still left wondering how the many Pokémon Professors around the world had failed to realize that Jigglypuff was not a Normal Pokémon but a Fairy Pokémon, time has been moving forward. Game Freak and The Pokémon Company International have today announced a brand new Pokemon for the upcoming X and Y editions set to release on the Nintendo 3DS this October.

Junichi Masuda, Pokémon X and Pokémon Y video game Director from Game Freak, sent a special video message today at the Japan Expo in Paris. Included was the reveal of an all-new Steel and Ghost-type Pokémon, Honedge. It is now known that Honedge comes into being when a departed spirit possesses a sword that once belonged to humans. It can use the blue cloth attached to its hilt as nimbly as an arm. Pokémon Trainers who carelessly take this blade in hand may find the blue cloth wrapping itself around them and draining their energy!

Honedge can learn the attack Swords Dance, a Normal-type move. Swords Dance is a frenetic dance that uplifts the fighting spirit and sharply raises the user’s Attack stat. The effect can be increased by using this move multiple times in succession, helping Trainers who deploy this move at the beginning of a battle to overwhelm one opponent after another!

I would be interested to see its immunities and weaknesses – especially given this is a rather unique hybrid of Pokemon Types.