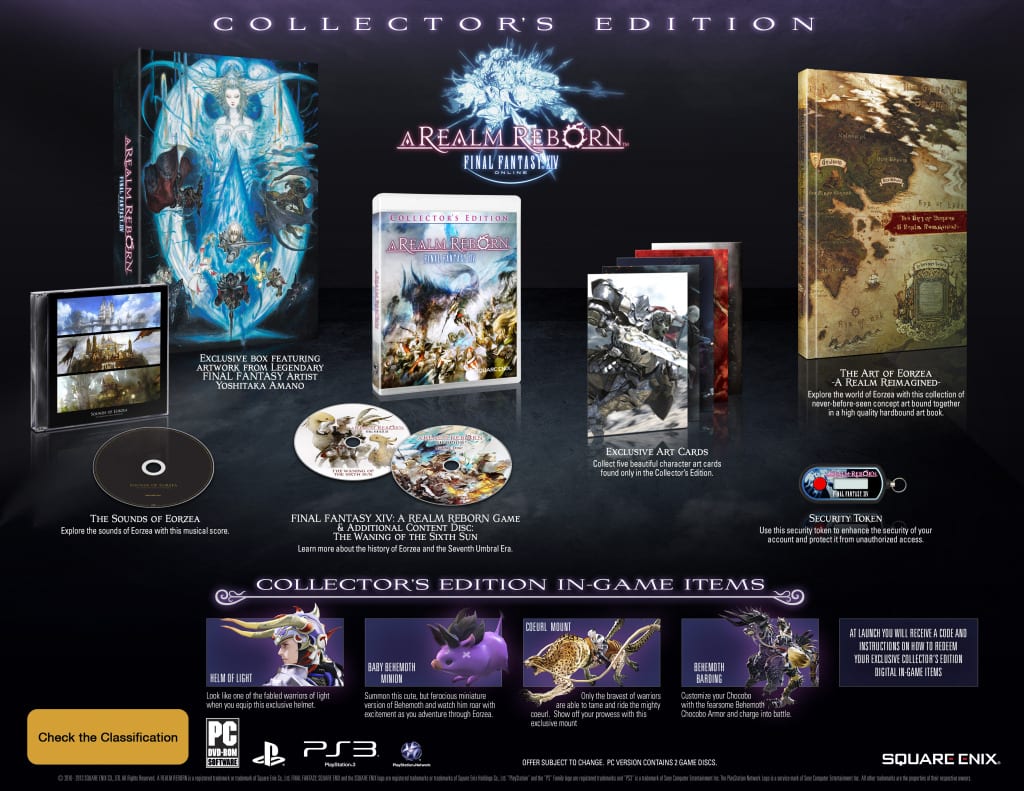 While Final Fantasy XIV did receive an official release a few years ago, with A Realm Reborn set to literally give new life to what was otherwise a rather lackluster online game Square Enix have decided to re-publish it, this time not only on the PC but also for the first time on the Playstation 3. It has been confirmed that pre-orders are now available for the game and its many editions – which are set to be released for 27th August 2013. Subscriptions will start at $19.95 a month, which looking around at current online game prices seems to be comparable.

For those who pre-order the game, you can get your hands on a few extra goodies including:

In addition, there is an ANZ Limited Edition which will earn gamers the Helm of Light Helmet for in-game, allowing your character to become “one of the fabled warriors of light”. But of course, the edition I am sure many more people are wondering about is the Collector’s Edition, which has been confirmed and will include the following goodies:

Persons who already have a subscription for Final Fantasy XIV will not need to buy this release to play the game on the PC – and will be able to download Final Fantasy XIV: A Realm Reborn for free.

“It gives me great pleasure to announce the release date of FINAL FANTASY XIV: A Realm Reborn.

It has been a long road from the game’s inception to the beta, but thanks to your fervent support and invaluable feedback, the world of Eorzea will soon complete its journey of rebirth.

We have endeavoured to make the game affordable so that adventurers will be able to experience the vibrant world of Eorzea. We have also prepared a collector’s edition version of the game, which includes a veritable assortment of premium items.