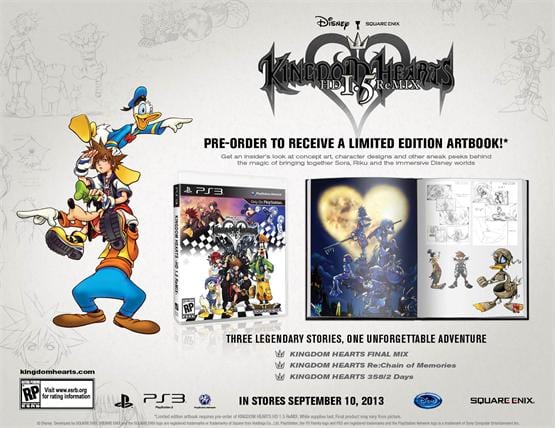 With Kingdom Hearts HD 1.5 ReMIX, a compilation of three games in the Kingdom Hearts franchise (Kingdom Hearts Final Mix, Kingdom Hearts RE: Chain of Memories and Kingdom Hearts 358/2 Days) set for release on the Playstation 3 this September, it may be getting to that time when you decide to pre-order the title. Good news is that pre-ordering will net you a small added bonus in terms of a 24-page hardcover artbook.

While surprisingly small in size to cover all three games, this artbook is set to treat fans to an array of visuals such as character renders, promotional art and the artwork of different Disney worlds from all three games.

Having seemingly settled on the Nintendo DS/3DS consoles for quite a while, HD 1.5 ReMIX is set to bring three games back to the Playstation consoles, all three of which have never been released in our region before. Final Mix is an improved version of the original Kingdom Hearts game, while we did receive Chain of Memories on the Gameboy Advance – the Playstation 2 port never was released and finally, 358/2 Days was released on the Nintendo DS and this PS3 edition is a cinematic retelling.