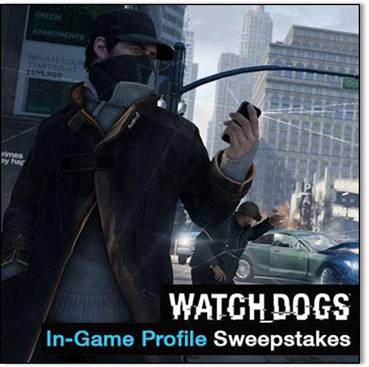 Have you ever wanted to see yourself featured in a AAA video game title? Later this year, Ubisoft is set to launch Watch_Dogs on a plethora of consoles, and set in an alternate reality of Chicago, Illinois which is managed by the city’s Centeral Operating System (or ctOS). Taking control of the protagonist Aiden Pearce, you are able to hack into many of the electronic devices of the city through the ctOS system – including access to information on the residents. This is where you come in.

From now until the 7th June 2013, Ubisoft and Sony Playstation will be holding their Watch_Dog’s In-game Profile Sweepstakes, where players are given the chance to become part of the games open world environment. By submitting your name, occupation and three novelty facts through the dedicated Facebook app, 30 randomly selected winners from various countries will be immortalized in the game.

Just to what extent the characters will be incorporated into the game is unknown, however it is a pretty interesting idea. Personally given there are over 400,000 Facebook subscribers to the Watch_Dogs official page alone, I would personally have liked more than just 30 people to be selected…. but hey, you have gotta be in it to win it!

I forwarded a request onto the team at Ubisoft Australia with regards to Playstation’s involvement in the event – and from what I can tell if you win but don’t pick up a Playstation copy of the game (PS3 or PS4), you are not guaranteed to appear in any other edition.