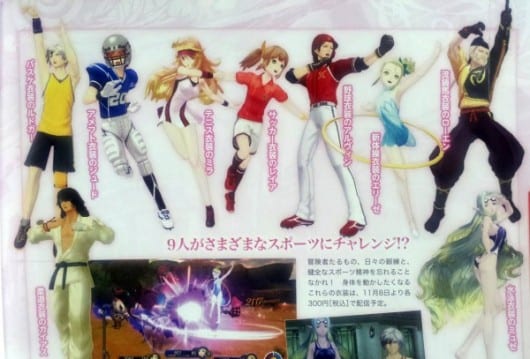 In a little more than a week from now, Namco Bandai will be releasing Tales of Xillia 2 to the Japanese gaming market – no doubt leaving some RPG fans envious as we remain waiting for the English-localized release of Tales of Xillia next year. But information is still being announced for the game, including this little trinket from this weeks issue of Famitsu.

As it has been for the last couple of Tales games, while you are given access to accessories and perhaps the odd free costume, you are able to customize your characters by spending real money via the Playstation Network. This week they announced sports uniform costumes for each of the games nine playable characters which will be released on the 8th November 2012 for 300 Yen each. The costumes to each character are as follows:

Some characters will also receive specific outfits including Ludger, Gaius and Musee who will receive costumes based off Luca Milda (Tales of Innocence), Dymlos Timber (Tales of Destiny) and Sheena Fujibayashi (Tales of Symphonic) on the 22nd November and the three will also receive swimsuit outfits on the 15th November.