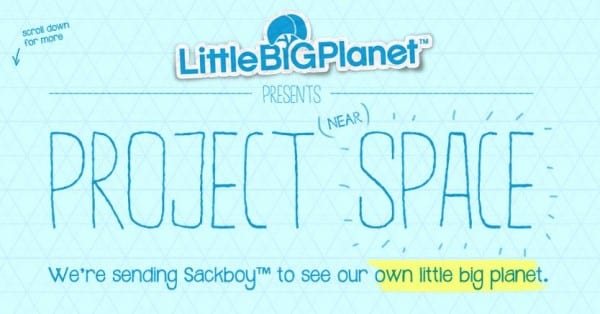 It was announced a few weeks back that Sony Computer Entertainment Australia would launch Project (Near) Spaceto celebrate the launch of LittleBigPlanet on the Playstation Vita. The company has today announced that this campaign has gone live, and fans can now play a role in Sackboy’s ultimate adventure. The adventure?…. Sackboy will rocket from Australian soil in his own meteorological balloon and soar into the stratosphere where he will capture and share his own images of our own little big planet.

As Sackboy prepares for his maiden voyage, this new social campaign invites fans and the community to become part of LittleBigPlanet history and help our hero “hessian-naut” gear up for the journey. Any Aussie fan can get involved from today, through the first `create’ phase; designing a gravity defying astro suit to be worn by Sackboy on this heroic expedition. The winning design submitted on PlayStation Australia’s Official Facebook page will then be created and worn by Sackboy.

Later this month, the next phase will offer Sackboy lovers the chance to ‘play’: with a range of clues, community members can estimate and mark his landing spot by placing a pin on the map. The fan with the closest pin will then win the ultimate LittleBigPlanet prize pack.

Join in the fun via the Playstation Australia Facebook Page!