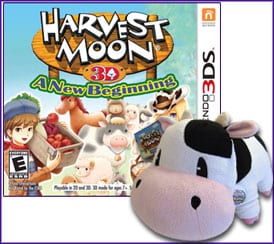 Natsume have today announced that their upcoming English localized release of Harvest Moon: A New Beginning has gone gold and will be available starting the 6th November 2012.

Due to an “overwhelming demand”, Natsume have announced that pre-orders through their official online store for the “Harvest Moon: A New Beginning Anniversary Edition” will end on the 23rd October 2012. In other words, if you are interested in pre-ordering this edition you only have five more days to do so. This edition includes the game and a 12″ premium cow plush.