Square Enix have today announced that its break-beat action game Demon’s Score is now available for purchase for iOS devices with an Android version (For NVIDIA Tegra 3 processors online) set for release in the next couple of months.

DEMONS’ SCORE is a breakbeat action game that seamlessly fuses music and battles. The title has been developed using the latest Unreal Engine 3 technology to produce high-quality 3D graphics and a user interface optimized for smartphones and tablets.

DEMONS’ SCORE delivers thrilling touch-based gameplay through a mind-blowing fusion of stunning 3D graphics and music created by hit songwriters. The soundtrack has been composed by a number of renowned musicians in the Japanese music industry including Kohei Tanaka, known for his work on the Sakura Wars series, and Yoko Shimomura, whose accomplishments include work on the Kingdom Hearts series. 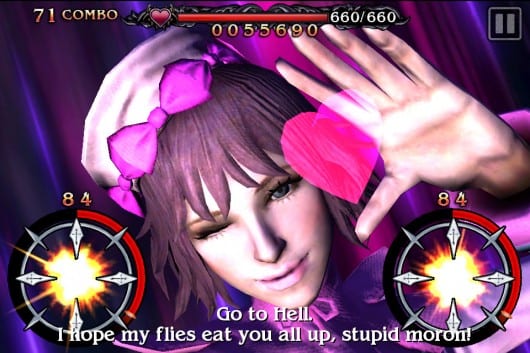 Serenity is just your average college girl, but when her father goes missing, she sets out to find him at the lab facility where he works. All Hell breaks loose when she lays hands on the Demons’ Score, a mysterious program that allows her body to be possessed by various demons. Where did her father disappear to? What’s the mystery behind the Demons’ Score? Serenity’s battle begins with the thunderous tunes of Hell!