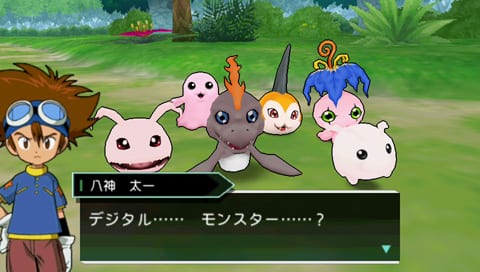 While those of us internationally are this year enjoying the original few seasons of Digimon: Digital Monsters (Digimon Adventure 2 in Australia and Digimon Adventure in North America) on DVD, Namco Bandai and Prope in Japan are busy working on a Playstation Portable game based on the original anime series as part of 15th Anniversary Celebrations.

The games official website have released the below four screenshots, showcasing when the Digidestined first meet the “In Training” Digimon, Greymon using his “Nova Blast” attack, Palmon using “Poison Ivy” and an out of battle screenshot following Izzy and Tentomon (Indicating you can control more than one Digidestined).

Unfortunately there is no word on if they will be releasing this outside of Japan – or if they do, if they will be attempting to keep the same or similar English voice cast (Which in my opinion, for a series of its type wasn’t half bad). Check out my reviews for the first season of the anime HERE and HERE.