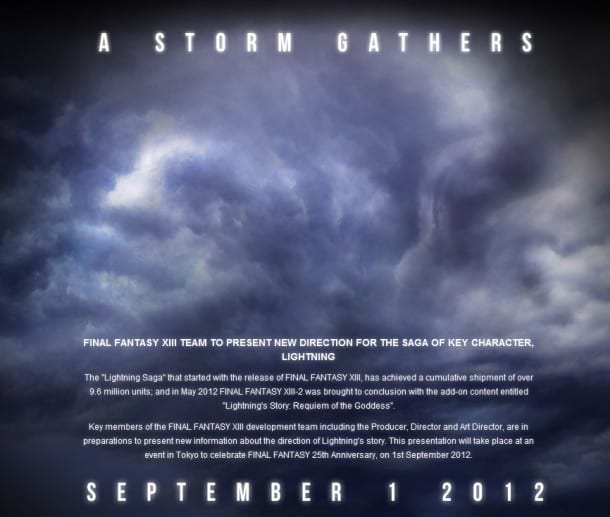 While I myself personally would prefer attention to be more heavily put towards Final Fantasy Versus XIII, Final Fantasy XV or even Final Fantasy: Crystal Chronicles ported to the Wii U (Seriously, the initial multiplayer control system could work well with the new Wii U Gamepad)… Square Enix still intends on finishing Lightning’s storyline as they indicated towards at the end of Final Fantasy XIII-2.

While details are currently limited on just how this will happen, the company have opened a new teaser website HERE which indicates they will be highlighting the direction to be taken on the 1st September 2012, at the Final Fantasy Gallery Event in Shibuya.

The “Lightning Saga” that started with the release of FINAL FANTASY XIII, has achieved a cumulative shipment of over 9.6 million units; and in May 2012 FINAL FANTASY XIII-2 was brought to conclusion with the add-on content entitled “Lightning’s Story: Requiem of the Goddess”.

Key members of the FINAL FANTASY XIII development team including the Producer, Director and Art Director, are in preparations to present new information about the direction of Lightning’s story. This presentation will take place at an event in Tokyo to celebrate FINAL FANTASY 25th Anniversary, on 1st September 2012.

Want it or not, good chances are that this is not the end of the story for Final Fantasy XIII.