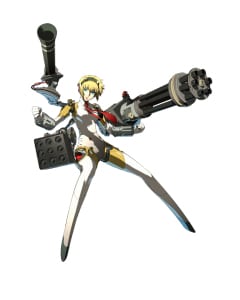 Despite the title Persona 4 Arena, the characters in the game are not restricted to just the Investigation Team… at least as of the games initial release there are four returning members from the prior release of Persona 3 – three members for S.E.E.S Aigis, Akihiko and Mitsuru alongside Elizabeth who serves as Igor’s assistant in the Velvet Room. With the games release today, ATLUS USA have finally released the remaining character profiles for Persona 4 Arena, so I would like to take the time to introduce you to the previously unprofiled characters – for those of you whom this may be the first game in the series you are playing.

The first of these characters is Aigis, a combat android purpose built by the Kirijo Group to destroy Shadows. Despite being a machine, her heart allows her to summon her Persona Athena. As with the RPG, her combat seems to be more purpose built around heavy weaponary and her Orgia mode, which allows her to gain the upper hand physically. Unfortunately it doesn’t seem to have the power of the Wild Card as she obtained in “The Answer” chapter of Persona 3 FES. 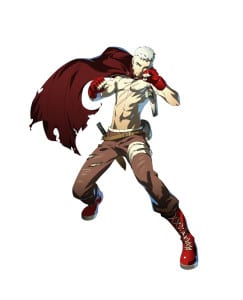 Akihiko Sanada is also a former member of SEES who still retains close contact with Mitsuru, who despite their occasional outbursts did serve as two of the three original members of the group. Personally I never really used him as a character – often keeping him around until Ken Amada joined the party who had the perk of using both Zio and Hama spells.

Though still in college, his characteristic thirst to be stronger led him around the world to train. He can rush down the opponents with his quick fists, and finish them off with his Persona, Caesar. 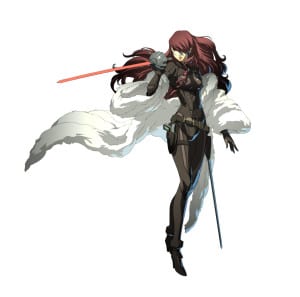 The third and final member of SEES in Persona 4 Arena is Mitsuru Kirijo, heiress of the Kirijo Group mega-corporation. Was the initial leader of SEES who ended the Tatsumi Port Island Incident. Though beautiful, smart and popular, she is also aloof. Personally in all my playthroughs of Persona 3, she was the one character which remained in my party during all playthroughs (With the exception of the M.C).

Her Persona Artemisia can freeze her opponents to the bone, earning her the title of Imperious Queen of Executions (At least according to the manga).

Out of all the returning (and playable) characters in Persona 4 Arena, Elizabeth is the only character who gamers would have not had control of in RPG releases – but was crucial to the game in the Velvet Room. Now a former resident of the Velvet Room and “one who governs power”, she has since appeared in the TV World for reasons which I am sure will soon be revealed.

She looks frail, but the onslaught she dishes out is off the scale. Stymie your opponents with Persona Cards, then decimate them with Megidolaon.